David Pecker’s Biggest Challenge
In facing down Jeff Bezos (and, potentially, the Feds), the magazine industry's most prolific survivor may face his toughest test yet. 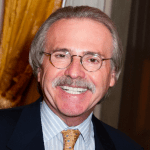 David Pecker doesn’t need to win a reality show to be deemed a survivor.

April will mark the 20th anniversary of his acquisition of National Enquirer parent American Media Inc., and in that span he has persevered in spite of a 2001 anthrax attack, a 2010 bankruptcy filing and scores of other internal and external controversies.

But the uproar caused by the Enquirer‘s January 9 story on Amazon founder/CEO and Washington Post owner Jeff Bezos’ affair with Lauren Sanchez—and Bezos’ retaliatory February 7 post on Medium claiming that the Enquirer would publish personal photos unless he made “a specific false public statement to the press that ‘I have no knowledge or basis for suggesting that AMI’s coverage was politically motivated or influenced by political forces’”—brought Pecker’s crises to a new level.

Should Bezos sue AMI for libel and/or extortion, his $135 billion net worth would make Pecker’s defense very expensive. But even if Bezos backs off, the bigger threat is the potential violation of Pecker’s immunity deal with federal prosecutors, which he received in August after agreeing to cooperate with an inquiry into former Donald Trump attorney Michael Cohen’s payments to women—payments allegedly made in concert with the Enquirer suppressing stories on their affairs with Trump. If so, AMI and Pecker could be exposed to criminal liability, and his well-publicized friendship with Trump would be a double-edged sword.

Pecker has been a kingpin in the magazine industry since 1990, but he has always marched to the beat of his own drummer. It was in September 1990 when Pecker, then-CFO at Hachette Filipacchi Media U.S., did not follow CEO Peter Diamandis in exiting the company after its unsuccessful auction of Woman’s Day. Pecker’s reward was a promotion to CEO, but he was shunned and sometimes ridiculed by a magazine establishment that had an affection for Diamandis, who passed away in 2013.

In November 1995, Pecker and HFM partnered with John F. Kennedy, Jr. to launch George magazine after Kennedy’s overtures to other publishers were rejected. George was widely perceived as an attention-grabber for Pecker (who got plenty of press coverage) as much as for Kennedy. 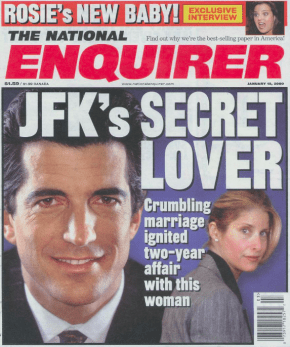 By the time of JFK Jr.’s death in July 1999, Pecker was three months into his ownership of AMI, and he said that the Enquirer and his other tabloids would not be publishing anything damaging about Kennedy out of respect to his memory. That did not last very long, as rumors about the Kennedy-Bessette marriage festered for months after their deaths, including the Enquirer‘s outing of JFK Jr.’s alleged mistress in its January 18, 2000 issue. But Pecker was unscathed.

Pecker would have well-publicized brouhahas with Bonnie Fuller after paying the editor $1 million-plus to move from Us Weekly to AMI in 2003 (she would leave in 2008) and with Tiger Woods in 2007 after the golfer agreed to a feature in the AMI-owned Men’s Fitness because the Enquirer threatened to expose his infidelities (which, of course, it eventually did two years later).

And in 2010, AMI would enter and quickly emerge from a bankruptcy filing that showed Pecker’s skills as a rare publishing CEO with a CPA. His financial acumen in keeping AMI afloat with a revolving door of investors—the most recent being a late-2018 restructuring that renamed the company American Media LLC—enhanced a reputation first established when he engineered the 1986 sale of CBS Magazines to Diamandis and the subsequent 1987 flipping to Hachette (both deals enriched numerous executives).

To paraphrase the Bethany McLean/Peter Elkind book on Enron’s 2001 downfall, David Pecker has long been considered the “The Smartest Guy in the Room.” But Bezos and the Feds may give this reputation its toughest test yet.