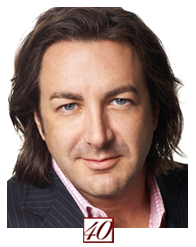 Since September 2006, Esquire has been defying the principles of Coverlines 101 with its type-heavy and largely illegible copy barraging almost every cover. Design director David Curcurito says the concept, the "Vietnam Memorial" approach, was editor David Granger’s, but Curcurito is the one who has been executing the design and refining the style month after month—a clear signal that it’s working. According to Esquire, the magazine is consistently seeing stronger newsstand sales since implementing the new cover design.

Also since then, copycats have appeared in everything from flyers to city and regional magazines and others. But Curcurito welcomes them: "It’s a form of flattery," he says. "At first it was upsetting because I would have to continually reinvent the concept to stay ahead of the curve. But it keeps me on my toes."

The cover isn’t the only fresh idea. A few years ago, Esquire redesigned front-of-the-book and the editor’s letter page to include user-generated content. Design elements began creeping into what is normally white space in October of last year, an entire novella ran in the margins.

Curcurito says he doesn’t look around much at what other designers are doing, preferring to follow his gut. "But the ideas don’t come from a dark corner of my brain," he says. "They come from social interaction with smart and fun people. I surround myself with great people who are as good as me if not better."

He particularly works well with Granger, he says, and enjoys their collaborative back-and-forth. "It makes the product smarter in the end. If I had all the answers myself, I don’t know how comfortable I’d feel."

His advice to other designers: "Be confident in conveying these ideas. Know when to fight and when to back down." Also, "Take chances. Be smart but put your butt on the line."

VITAL STATS: Esquire saw a 6.1 percent increase in newsstand sales in the first half of 2007, according to DNR News.