The Daily Beast Fully Absorbs Newsweek.com
The URL will redirect to the brand's Daily Beast channel. 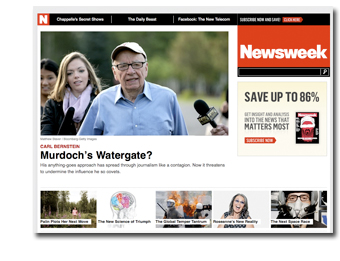 It’s long been expected turn out this way, and it’s finally happening. NewYorkMag.com’s Daily Intel is reporting that The Daily Beast will be retiring the Newsweek.com URL on July 19. Traffic to that address will be redirected to the Newsweek channel on Dailybeast.com.

Daily Intel’s Chris Rovar reports: "The Newsweek channel will still have all the archived magazine content from before (unlike Time, Newsweek puts all of its print content online), and it will be edited and updated once a day to rotate features."

Since the merger of Newsweek and The Daily Beast, Newsweek.com had been targeted to be retired, but it’s still a notable fade-out for the digital identity of an iconic brand.

Joseph Galarneau, the chief operating officer and digital general manager of The Newsweek/Daily Beast Co., left in June. Galarneau joined Newsweek as SVP of operations and CIO mid-July 2009 and was promoted into the COO/GM spot just before the merger last November.

At the time of the merger, Newsweek.com was getting twice as many monthly uniques—10 million compared to Dailybeast.com’s 5 million.