Content Aggregator Apps and Publishers: A Complicated Dynamic (Infographic)
A crowded market, but one that can expand a publisher's reach.

Many publishers already have their own native apps, while others are in development. Although they can be expensive to launch, apps have helped some publishers establish a foothold within the mobile frontier.

But with the rapid rise of third-party news aggregators- such as Flipboard, Zite, Paper and Pulse-an interesting mobile dynamic is developing, one that’s adding to a crowded market of content distribution. Nevertheless, publishers have not shied away from the mobile space, especially since it’s proving to grow audience and drive incremental ad revenue. More often than not, publishers will take a cover-all-bases approach-if there’s a potentially new audience to tap through a third-party service, then it’s worth experimenting with.

If you run a search in the Apple App Store for "news" a staggering 2,199 results surface. Needless to say, that’s a lot. Of course, that includes native apps like Buzzfeed’s and Business Insider’s, but it also includes the "social news" apps like those mentioned above. For a reader that means possible information overload. And for a publisher it means more touch points to monitor with uncertain returns and some possible competition for its own apps.

The news aggregation app market consolidated a bit in early March when Zite, which was acquired by CNN in 2011, was bought by Flipboard.

Reach is always an objective for a content producer, and at face value news aggregators can penetrate new audiences. But with so many available options it’s questionable if aggregators are benefiting publishers or just creating more noise. Moreover, it raises questions about the differences between symbioses and looting.

Publishers would obviously rather have readers using their own apps and visiting their own websites, after all, that’s where the revenue potential is. Still, aggregators are inherently referring tools.

So What’s the Problem?

The problem for some is that headlines and snippets from publishers become the aggregator’s commodity, whereas publishers can only benefit if a user clicks through to their website. What’s more, there’s a debate whether the aggregators should share revenue with publishers, since they are earning money on the back of others’ content. It’s not unlike the issues the music industry has faced with streaming audio products.

The debate will likely continue to rage on as mobile usage continues to grow and possibly outpace Web traffic. Some platforms like Flipboard and Pulse are onboarding content partners, but for the most part, there aren’t too many revenue sharing opportunities right now.

In terms of traffic, there’s not a lot of evidence suggesting aggregators are driving large numbers of readers to websites-at least not compared to search and social. So that raises questions about revenue potential and whether or not aggregators are really worth getting that worked up about. Granted, nobody likes leaving money on the table, but sometimes collecting that money isn’t worth the trade offs. So for now, publishers might not want to waste their resources chasing down fractions of digital dimes.

Another issue for both readers and publishers is the sheer number of options. What’s the difference between, say, Pulse and Paper? Is there a benefit for using or having content on more than one app? How is the content discovered and surfaced from one app to another? The list of questions goes on and on, and while the aggregators all have the same objective, they are not all created equally. With that in mind, here is an infographic that maps some important features and performance metrics on some of the most popular aggregators: 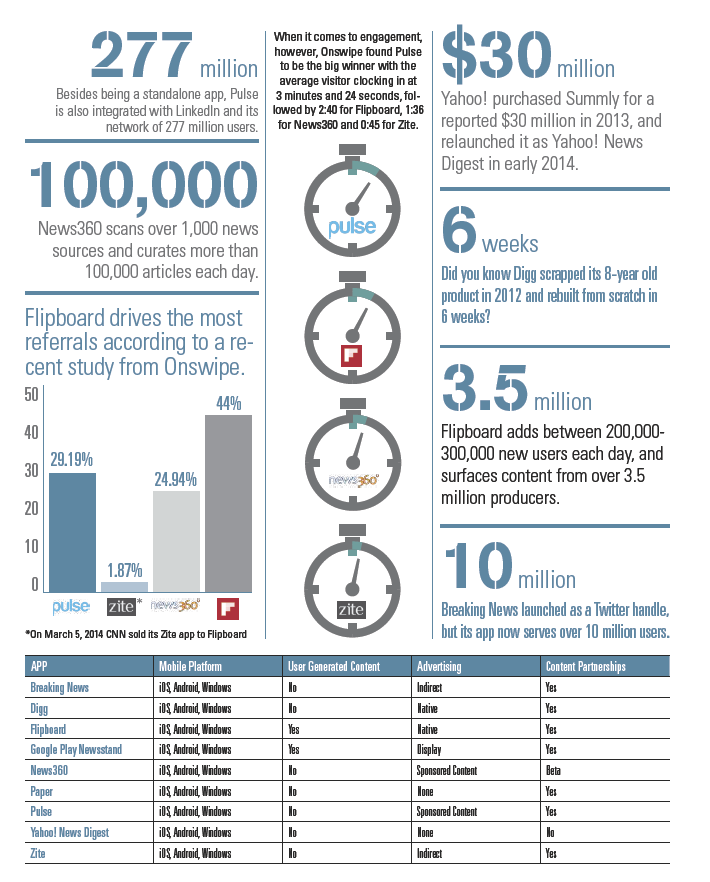