Connect Meetings Acquires BizBash
BizBash founder and CEO David Adler will stay on as chairman and hold a 20% stake in the newly expanded Connect.

BizBash, the 19-year old B2B media company for events organizers, has been acquired by Connect Meetings for an undisclosed sum, both sides announced.

In addition to its website and its own print magazine—which Connect says it will continue to publish—BizBash will add to the Connect portfolio three annual BizBash Live conferences in Los Angeles, New York and Washington, D.C., which serve professionals across the broader events industry, while BizBash Live: Florida will be merged into the Connect Diversity Summit in Kissimmee, Fla. A fourth pop-up event, branded as BizBash National, will be colocated with the Connect Marketplace conference in New Orleans in August.

BizBash founder and CEO David Adler is staying on after the acquisition, transitioning to chairman and maintaining a 20% stake in the combined entity, he told Folio: in an email.

“Media and event properties are becoming platforms and being part of a larger platform will make the brand more successful,” he said, referring to BizBash’s community of events organizers, coupled with Connect’s reach among meeting planners, as “the building blocks” of “a next-generation event and media company.”

Adler said it’s too early to tell precisely how the acquisition will impact BizBash’s existing staff and portfolio, particularly in markets where BizBash and Connect overlap, but acknowledged that some redundancies are likely.

“As a smart marketing and sales machine, we will be taking advantage of whatever synergies and co-locations make sense,” he said. “I am sure that there will be consolidation for the good of the business, but none of the details have been worked out.”

In a statement, Connect founder and president Chris Collinson highlighted the complementary nature of the two companies’ offerings and audiences.

“Connect has excelled in assisting meeting planners with site-selection needs; however, BizBash inspires a different audience of event professionals with education on design, inspiration and technology that creates a meaningful experience and wow factor for event attendees,” Collinson said. 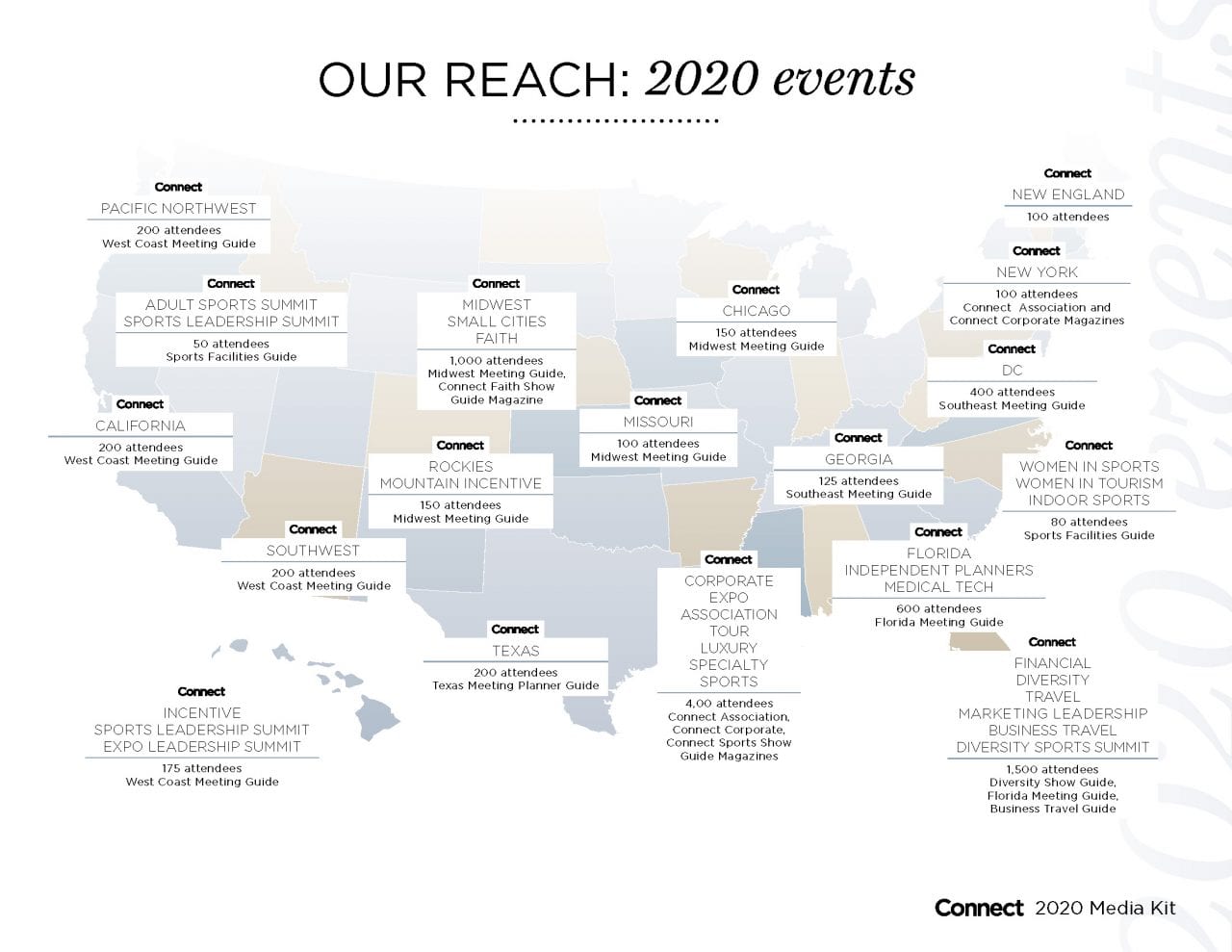 Connect Meetings’ slate of 2020 events prior to the BizBash acquisition, according to its media kit.

Douglas Emslie, CEO of parent company Tarsus Group, added that the U.S. is a “key area of focus,” and that Tarsus has already outlined “numerous opportunities” to expand both Connect and BizBash through synergies provided by the deal.

Publicly traded on the London Stock Exchange until its £561 million ($736 million) takeover by private equity firm Charterhouse Capital Partners in June, Tarsus has been an active acquirer in the second half of 2019, particularly in the U.S. and Asia. In September, it bought a 70% stake in the Touch China & 3D Glass Expo, followed by three acquisitions in the past month alone: BizBash, the UK-based exhibitions firm Smarter Shows and the TyreExpo series of automotive tradeshows in India, Singapore and South Africa.