Condé Nast Launches Reader for the iPhone
GQ will roll out first as an app at a $2.99 price point. 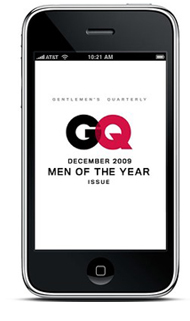 Condé Nast has developed its own reader technology to view magazine content on Apple’s iPhone. The publisher will test launch the December issue of GQ mid-November for $2.99 in the App Store.

Up to now, publishers have generally launched iPhone apps that are a functional slice of a magazine brand. Conde Nast is taking the next step and making full issues available as apps that are viewed via its own proprietary reader.

That the iPhone reader technology was developed in-house is a break from relying on another company’s platform—such as Amazon’s Kindle, which publishers have generally disliked for its inflexible distribution and revenue sharing scheme.

"One of the important things is the app itself is actually a reader," Sarah Chubb, president of Condé Nast Digital, told FOLIO: sister title Audience Development. "There are other reader apps for the iPhone, the Amazon Kindle being the successful one. We make the distinction that it’s a reader because we’ve designed and built it in-house. We’ll see what works and maybe use it with our other magazines as well."

Chubb said GQ was selected for the debut because its Web site was just relaunched and the magazine has done well this year on the newsstand (ABC numbers indicate single copy sales were relatively flat from December 2008 to June 2009, but that’s much better than most). Its audience of young, fashion-forward males also overlaps with the iPhone aesthetic. "What capped the decision, though, was the December Men of the Year issue," she said. "There are lots of different celebrities and it lends itself to a big ‘ta-da’ on the newsstand and it lends itself well to the app format as well."

The $2.99 price point was selected for its proximity to the $4.50 newsstand price and its spot on the "higher end" of the app price scale. The price was not tested prior to launch.

Extra functionality includes video, audio, and hotlinks to external Web sites. Chubb said they’ll be paying close attention to how users navigate the content to analyze how the product is used.