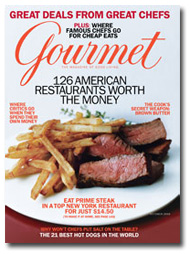 Ever since Condé Nast hired consultants McKinsey & Co. this summer to help the big consumer magazine publisher rethink its business strategy, news trickled out about all of the dramatic changes that were unfolding.

More recently, reports speculated that some Condé managers would be told to reduce their budgets by roughly 25 percent. Some magazines would be folded. Then, reportedly, they wouldn’t fold.

But yesterday, a few weeks after the McKinsey consultants were said to have wrapped up their report, the big bomb dropped at 4 Times Square: Condé Nast shuttered Gourmet, Cookie, Elegant Bride and Modern Bride. The news, especially in regard to Gourmet, sent shockwaves around the industry that spilled over into the mainstream media. Roughly 180 people lost their jobs.

Monday evening, I spoke with Condé Nast president and CEO Chuck Townsend over e-mail about the magazine closings. He said the McKinsey consultants weren’t tasked with determining which magazines to shut down, but rather to concentrate on the “businesses with the strongest potential for growth for the long term.” In regard to Gourmet—which launched in 1941 and was acquired by Condé Nast in the early 1980s—Townsend said it had less potential for strength and long-term growth than its sister food title, Bon Appetit.

Editorial content aside, I think it made some sense, from a business standpoint, to close those affected magazines. Townsend said the company will reinvest the money it saves from no longer publishing the titles into its remaining magazine products.

Despite those steep losses, Townsend said he is convinced the titles are still “strong contributing businesses to our company.” When asked if any more Condé Nast magazines will be closed, Townsend’s simple answer was “no.”

That’s some good news for the paranoid (and rightly so) Condé Nast staffers. However, if the speculation is right, more cutbacks are coming, and could roll out in waves over the next several months. Unfortunately, Townsend declined to tell me about any of those pending changes.