From Cats to Breaking News: BuzzFeed’s President on Social Trends
Jon Steinberg describes the maturing of the brand at the min Digital Summit.

NEW YORK—If you don’t have a social mobile strategy, you’re already late to the game.

“We are defining news for a generation without any existing brand affinity,” Steinberg told the audience of almost 150 media professionals. The exec went on to say that 60 percent of the brand’s audience consists of millennials aged 18-34—individuals who came of age as digital natives and have stronger ties to the Web than to traditional printed media.

By recognizing the desires and habits of this audience, Steinberg said BuzzFeed has been able to become the media company for the social, and increasingly mobile age.

“Social is mobile,” he said, adding that 50 percent of the site’s more than 60 million monthly unique visitors is derived from mobile devices alone, many of whom are discovering BuzzFeed content on social platforms. “Tablets don’t even really register against actual phones.”

Social and mobile is the new starting point in media, he said, and companies that develop a robust strategy on these platforms will succeed in overcoming the “bored in line network.”

“Magazine sales at the checkout rack, as well as gum sales, are down because people are literally no longer looking at the checkout counter,” and are instead concentrating on their phones, he said. “The checkout is now a dead zone.”

“How are we harnessing these big shifts in media? We designed a site that is a feed based format—an assortment of things we know that are right for this generation,” he said. “What we recognized was that social was eating all of media, and by that the (social) feed defines how people consume all of their content.” 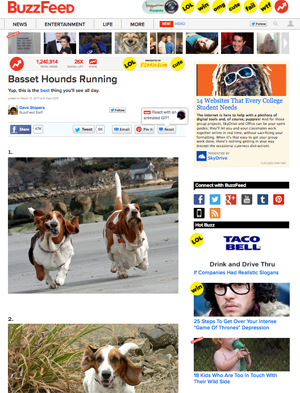 “Animals are the new leisure section,” he said. Steinberg pointed to a March 2011 article entitled “Basset Hounds Running,” which showcases exactly that. The post has had over 1.1 million total views and a social lift that was 34 times higher than a typical story.

By delivering breezy, fun content, BuzzFeed has been able to build a loyal following, which in turn has allowed it to expand.

A Social Approach to News Reporting

“As social media matures, the basset hounds, memes and personal updates were joined by breaking news, original content and substantive articles,” he said. “BuzzFeed is maturing along with the social Web. Even people bored at work or in line are hungry for news and quality reporting.”

Since audiences are increasingly getting their information from the social, mobile Web, BuzzFeed is translating its strategy in chasing hard news. But, he said, how can the same site publish a story like “McCain to Endorse Romney Tomorrow,” and “33 Animals Who Are Extremely Disappointed In You”?

“There was a time when having a food article next to the Pentagon Papers was considered absurd,” he said. “(But) scoops are another kind of shareable content that spread cross Twitter and Facebook.”

By taking a social approach to news and reporting and taking advantage of YouTube—what Steinberg calls the new cable network—the brand has been able to grow its YouTube audience to more than 1 million subscribers, averaging about 60 million views per month.

“50 percent of BuzzFeed video views are mobile,” he said. “We’ve started partnering with traditional media companies. We’re able to take content from premium news sources and news outlets and we’re able to repackage into a sharable, more native format for YouTube that would otherwise be locked into television.”

The Social Shift in Advertising

Editorial content was first, but Steinberg said the big shift of social is now coming to advertising. The exec said that the site has completely eliminated banner ads since 100 percent of the brand’s revenue is now coming from social content marketing.

“Banners work even worse in mobile than they do on desktops,” he said. “We were very lucky that our feed format lends itself to the same story units.”

The content marketing story units have click through rates of one to two percent—over 10 times the industry average—with some brands experiencing a lift of more than 400 percent. This kind of content marketing, Steinberg added, works even better on mobile.

“About 18 months ago we were just a cat and otter site, now we’re covering a lot of hard hitting issues,” he said. “This is a really tough industry, and in a very short period of time there’s been massive moves in terms of the type of content people are consuming.”