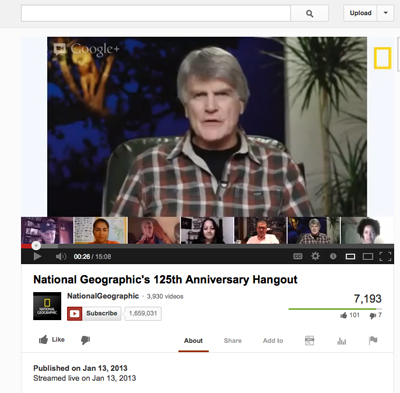 Google+ currently outranks Twitter as the number two social network after Facebook, with 343 million active monthly users, according to market research firm Global Web Index. Yet, many publishers are not actively courting Google+ audiences in a deep way.

To celebrate and promote National Geographic’s 125th anniversary campaign in January, the society used Google+ to court new and existing audiences in order to heighten awareness and engagement.

“If Alexander Graham Bell was imagining the National Geographic Society today and not 125 years ago and was trying to figure out a way to tell stories of exploration, he’d probably suggest a Google+ hangout,” says Amy Maniatis, chief marketing office for the National Geographic Society. “This is an emerging and rapidly growing platform that gives us a very unique way to make our story-telling incredibly successful and it lets folks participate.”

Last Spring, NatGeo first entered the realm of Google+ Hangouts and in early January 2013 it launched another—explorers like Jane Goodall, Dr. Robert Ballard and Kenny Broad all participated in an hour-and-a-half long weekend hang out to discuss the next 125 years of exploration.

As a result of the hangout, the National Geographic Google+ account ended up garnering 150,000 new members and 50 million social impressions across all social media platforms.

“National Geographic was able to use the basic Google+ tools to build this incredible experience,” says Will Houghteling, education and how-to community partnerships lead for Google+. “The platform is built in a way to enable these types of experiences.”

Users had a variety of ways to interact with National Geographic for this Google+ hangout by uploading questions for the hangout hosts through: A video question posted to YouTube with #NatGeo125; by posting a question on Google+ or Twitter with #NatGeo125; commenting on the National Geographic News Watch blog or by leaving a comment on a Facebook post.

Hangouts On Air allow individuals and brands to stream a live hangout publicly on a Google+ profile, YouTube channel and website. During the broadcast, the Google+ hangout manager can look inside the hangout to see how many viewers are watching live. Once off the air, Google uploads a public recording to a brand’s YouTube channel so it’s easy to share and discuss a broadcast after it’s over.

“As soon as you publish your Google+ Hangout to YouTube you get all of the rich YouTube analytics that you would get if you uploaded a video independently—viewers, increases in subscribers, comments and likes,” says Houghteling. “You can also see the live viewership on Google+ as it’s occurring. These tools allow publishers to engage with their consumers—taking static content from a magazine or blog post and turning it into a two way conversation.”

Google says that it is open to working with publishers that would like to bring in sponsors for On Air Hangouts—creating a possible social media revenue generation strategy for content brands.

“With all of these social platforms there’s always the big question of what are you getting in return for this or how is this paying out?,” says Maniatis. “When we can leverage where people are convening to tell our stories our belief is all boats will rise and we see that in the overall engagement of the stories and the sharing of those stories.”