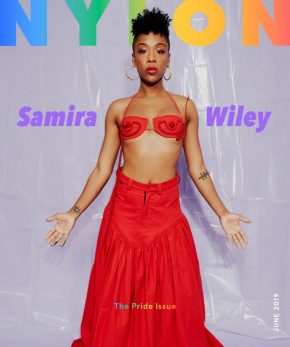 Nylon, the alternative fashion and lifestyle magazine founded in 1999, was scooped up by Bustle Digital Group for an undisclosed sum on Thursday.

Effective immediately, Nylon’s editorial and design teams will join BDG, including editor-in-chief Gabrielle Korn, who will remain on in her capacity as top editor. Nylon Media president Evan Luzzatto, however will step down from his role, but will remain a partner to BDG, focusing on helping the company in its international expansion strategy.

Part of the acquisition includes the magazine’s return to print, a platform that it shuttered in October 2017, resulting in the layoffs of a dozen print staffers.

“We will invest heavily in expanding Nylon’s editorial team and advancing its strength in live experiences. Additionally, we believe that Nylon should exist in a print format, and that is part of the future plan,” Bryan Goldberg, CEO and founder of BDG, said in a statement.

This would be the first of BDG’s properties—which includes Bustle, Romper, Elite Daily and the Zoe Report, as well as the recently acquired Gawker, The Outline, Mic and experiential marketing and events division Flavorpill Media—to have a print component. However, according to Variety, who first reported the sale, the magazine will not return to a monthly frequency. Instead, the print component will be made up of SIPs tied to major cultural events like Coachella. According to a spokesperson from BDG, it’s not known exactly how many issues this will be printed at this time.

Not included in the sale is Nylon Media’s former influencer-marketing division Socialyte, which Luzzatto will remain the chairperson of, and most of Nylon’s sales and business staff will remain employed under.

This is the seventh acquisition by BDG since the company was founded in 2013 and follows shortly after the company’s recent kick of buying shuttered and/or failing media brands, including Gawker, which is set to relaunch later this year, and Mic, which BDG bought after the brand laid off nearly all of its employees in November last year.

Nylon, unlike the two aforementioned brands, says it’s seen a 650% increase in engagement following its site redesign in 2018, and just this year expanded into nine international markets with editions in Spain, China, Singapore and others.

In a statement to Variety, Goldberg said, “It’s a tough time to be an independent, or family-owned, magazine. But this brand has real strength. We think it can be a premium brand for the next 20 or 30 years.”