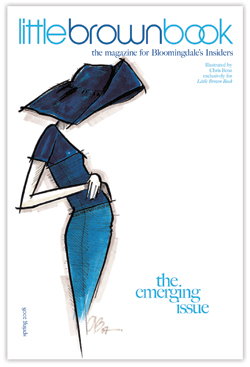 Project: Little Brown Book
Launched: 2005
Circulation: 175,000
Objective: To create an ongoing dialog with Bloomingdale’s most valuable customers, and to drive them to the store.

Magazines are all about community, leveraging the common ground that links a group of people. So when Bloomingdale’s decided it wanted to take its “Insider” credit card program to the next level—to create a unifying culture for its most loyal, active and fashion-conscious customers—a new custom magazine made perfect sense as part of the solution. And what better way to brand that magazine than to draw on the upscale retailer’s iconic symbol, its “big,” “medium,” and “little” brown bags.

The partnership between Rodale and Bloomingdale’s developed from an existing relationship between the store chain and Rodale Custom Publishing’s director of publishing Duncan Milne, who previously worked with John Brown Publishing, a UK-based company that published a custom magazine for Bloomingdale’s called B. For the new publication, the store sought to reach its highest-spending shoppers. Milne and his team hatched the concept for the Little Brown Book, a custom magazine that is direct-mailed quarterly to the 175,000 highest-spending Bloomingdale’s “Insiders,” or credit card holders, and draws on the store’s iconic branding tool—the brown bags that can be recognized in the hands of hundreds of men and women in cities and shopping districts around the country.

Breaking through the Mail Clutter

One of the most important features of Little Brown Book is its exclusive offers—tickets to Broadway plays or the opera, private meet-and-greet events with artists and designers, extra credit card rewards points for purchasing certain products, and so on. According to Rodale, every offer in the magazine—there are usually 6 to 10—has sold out within a week (and sometimes within an hour).

Bloomingdale’s’ objective for the magazine is not just sales but engagement. “If you’re a regular Bloomingdale’s shopper you get a lot of mail,” says Valerie Valente, vice president of custom publishing. “We wanted this product to break through the clutter.”

With that goal in mind, Valente says, from the start, her team wanted the covers to stand out. Now, each cover is illustrated by the designer whose product is featured as an exclusive offer in the magazine. For example, designer Chris Benz illustrated the cover of this year’s spring issue, and inside is an offer to attend his private show and take away a sun hat.

Other elements of the design draw on what Valente calls the “uber-branded” shopping bag theme—the sidebars are fashioned to resemble a little brown bag, and the magazine is printed on coated paper intended to feel like a shopping bag. Little Brown Book has won multiple design awards from the Custom Publishing Council and the Society of Publication Designers.

In October last year, Little Brown Book put out a line extension, Little Pink Book, in partnership with the Breast Cancer Research Foundation (BCRF). Distribution was extended to the seat pockets on Delta Airlines flights and the magazine was polybagged with Rodale’s Women’s Health in areas where there are Bloomingdale’s stores.

The doubly-branded issue featured special merchandise, sold in a separate “little pink boutique” section of the store as well as a “little pink book” section of the Bloomingdale’s Web site, of which sales proceeds were donated to the BCRF. Enough money was raised to fund two BCRF researchers. The partnership will continue this October.