Born From a Merger of Five Companies, EnsembleIQ Restructures
Korry Stagnito is among those out at the b2b publisher as it aims to shed redundancy and reduce payroll.

EnsembleIQ—the b2b media company formed two years ago out of the merger of three smaller publishers—is undergoing a reorganization this month, grouping its 20 media brands into four distinct market verticals and trimming its overall headcount by around 10 percent, according to multiple sources.

In the works since CEO David Shanker joined the company in late February, the shift follows EnsembleIQ’s purchases of several Canadian trade magazines from Rogers Media, in late 2016, and retail publisher Lebhar-Friedman this summer. The company was originally formed early in 2016 out of the merger of Edgell Communications, Stagnito Business Information, and the Path to Purchase Institute (P2PI).

“We’re really five companies in one,” Shanker tells Folio:, “so we’re changing how we go to market to better provide value to our clients.”

Shanker is on the road this week informing staffers of the company’s new structure, which will involve shuffling its brands into four distinct groups: Consumer Goods/Retail, Healthcare, Technology, and P2PI, which will remain its own division.

Because the company’s individual titles—such as Chain Store Age, the Progressive Grocer, or RIS News—hold the most recognition in the industries they serve, explains Shanker, the restructuring is aimed at allowing the company to bring to market solutions that draw from multiple brands, who will be working more closely with others in their respective groups to bring new, integrated products to market, coordinate strategies, and share best practices. 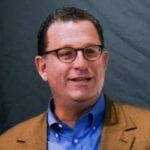 Shanker declined to share details on the number of employees who will be let go as a result of the changes, but he tells Folio: that he intends to meet with employees at each of the company’s four primary locations: Newark, N.J., Chicago, Toronto, and Montreal.

One source familiar with the situation called the cuts “significant” and said that a number of the company’s higher-paid directors and executives appear to be vulnerable. Another estimates that the number of cuts, when all is said and done, will be between 20 and 30.

Chief brand officer Korry Stagnito, who has served in various roles since EnsembleIQ’s formation including COO and chief business development officer, is among those leaving the company. This comes a month after Terese Herbig, who runs the Enterprise Solutions team focused on integrated sales and marketing across the company’s portfolio, was given the additional role of president of P2PI.

“[After a merger] you realize you have redundancies,” says Shanker. “You realize you have people doing the same jobs. It’s tough; it’s a very hard decision to make and nobody ever likes to do it, but it’s something that every great company has to do.”