Bonnier Corp. Terminates Editor-in-Chief Over Ethics Breach
A search for a successor is underway. 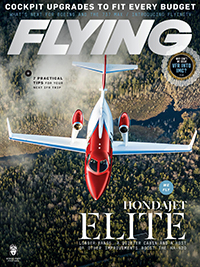 Bonnier declined to go into specifics and Pope did not respond to requests for comment, but two sources familiar with the situation tell Folio: that the editor’s dismissal arose from concerns over plagiarism.

In a memo to contributors earlier this month, Bonnier editorial director Shawn Bean stated that Pope, who had served as the aviation title’s editor-in-chief since 2015, “is no longer with Flying, effective immediately, after violating Bonnier’s code of journalistic ethics.”

The company did confirm that a search for a successor is underway, and that Bean—who oversees editorial across Bonnier’s fishing, boating and aviation titles—will pick up day-to-day oversight of Flying in the interim.

We’ll update this story if any new information comes to light. Read the full memo from Bean below:

My name is Shawn Bean and I’m the editorial director at Bonnier, where I oversee a number of enthusiast media titles including Flying. As an important part of the Flying team, I wanted to make sure you received this update directly from me. Stephen Pope is no longer with Flying, effective immediately, as a result of violating Bonnier’s code of journalistic ethics.

A plan for the future is already underway. In the interim, I will oversee the brand, with day-to-day content operations continuing under the direction of senior editor Rob Mark and associate editor Julie Boatman.

I’m available to speak in person if you like. Just let me know and we’ll find a time that works.

We appreciate all your contributions to Flying, and look forward to continuing that relationship.