Bon Appétit Modifies Print Recipe for a New Era
A year after joining as creative director, Michele Outland takes us inside what's changing in the 62 year-old food title's next chapter (and what isn't). 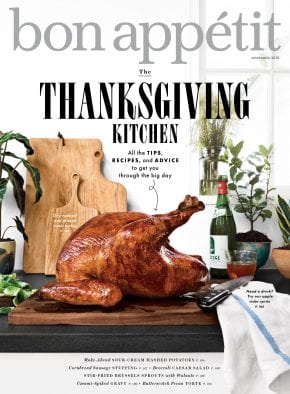 The November cover, captured on a Google Pixel 3 by Michael Graydon and Nikole Herriott.

Terminology notwithstanding, almost a year after returning to Condé Nast to take on her current role, Outland’s most significant aesthetic alterations to date debut with the magazine’s November issue—on newsstands Tuesday.

“I walked into a super strong brand, and there wasn’t a whole lot I wanted to change,” she adds. “I think [editor-in-chief Adam Rapoport] and the previous teams that were here have done a great job to establish the voice and tone of BA, so I just wanted to give it a couple of enhancements.”

That means you won’t be seeing many of the typical facets of a magazine redesign, such as the introduction of new typefaces—Paul Renner’s Futura remains the star player—or any significant adjustments to the magazine’s trim size or paper stock. Similarly, the Bon Appétit logo has been “redrawn” by Commercial Type—the studio that recently designed new fonts for The Guardian and T: The New York Times Style Magazine—but not altogether reimagined.

“We added a few more thicks and thins, which I felt gave it a little bit more elegance,” says Outland. “It’s super subtle, and most people probably won’t notice, but for us design nerds it’s kind of exciting.” 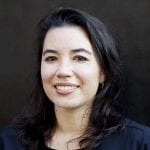 Alongside Rapoport, design director Chris Cristiano, and two newer team members: art director Christa Guerra (from Condé Nast Traveler) and designer Bryan Fountain (from MIT Technology Review), what Outland has updated, primarily, is the magazine’s front- and back-of-book sections, which have been restructured in accordance with the modern BA reader—and his or her hybrid, online and offline experience.

Up front, the magazine’s “Starters,” “BA Kitchen,” “City Guides,” and “The Feed” departments have been simplified into “Home” and “Away.”

“The home section still houses a lot of our great weeknight cooking content,” says Outland. “Increasingly, a lot of people on staff here have children, and we wanted it to reflect how we are cooking for our families.”

Meanwhile, the “Away” section will house all of each issue’s travel and restaurant content, including a new column featuring restaurant recommendations from Bon Appétit editors.

“They had completely different identities,” says Outland. “Flipping through it I just felt like I was in three different magazines. I was just hoping to make it a little more cohesive.”

Both the front and back sections, says Outland, will have another major thing in common: more visibility for the personalities behind the magazine, partially driven by what the brand has been doing outside of print.

“YouTube and video has become a big component of what we are doing here, and people are really getting to know our editors,” Outland continues. “We’re really starting to put a face to the name, so we wanted to make sure that this familiarity on YouTube is also present in the print aspect.”

Similarly, “Prep School,” the magazine’s back-of-book section that traditionally features tips from the Bon Appétit test kitchen, has been renamed “Basically” after the similarly-themed online vertical the brand launched last year. Even the November issue’s cover, shot on the Google Pixel 3 phone, was created out of a new, multi-platform promotional partnership between the tech firm and Condé Nast.

“Our readership in print is a little bit older,” says Outland. “There isn’t a huge swath of YouTube viewers in that audience, but I think we have a whole other audience online, and some of them don’t even know the magazine exists. It’s a great time for this cross-pollination of different platforms and seeing how we can drive things back and forth.” 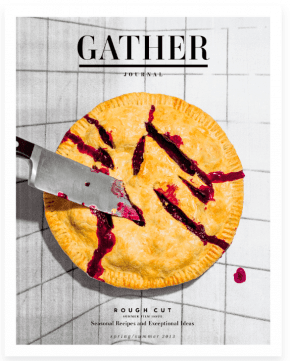 In addition to prior work at Domino, Nylon, and New York magazine, among others, Bon Appétit is not the only foodie magazine to which Outland provides creative direction. She serves in the same capacity at Gather Journal, the biannual title she co-founded with writer Fiorlla Valdesolo in 2012, which offers more of a canvas for experimentation than the mass-market BA.

“The creative direction I do at Gather, I definitely can’t do here,” she says. “Our readership is 1.5 million people, so we can’t go too wild and off the beaten track. We really have to deliver delicious food imagery in the most focused way possible. Any creative director is going to have their own style, but I’m still respectful of the brand and delivering something that is not too alienating.”

Bon Appétit, first and foremost, is about inspiring people to cook, says Outland, whereas some of the dishes featured in an issue of Gather may be more “thoughtful or intriguing” than necessarily appetizing. To wit: the cover of Gather Journal‘s third issue, “Rough Cut,” featured a pie being violently stabbed in a shower, à la “Psycho”—part of an issue-wide homage not just to delicious seasonal recipes, but also to the directors Alfred Hitchock and Wes Anderson.

The two titles call for different creative approaches, but both are aimed at doing what print does best: providing the reader with a captivating experience. And while Outland won’t say that she necessarily designs BA differently in the digital age than she has other titles in the past, she acknowledges that print is now but one of many avenues through which the brand reaches its audience.

“At the end of the day, I’m just a gigantic lover of print,” she adds. “I hope it well never die. There is something about holding a magazine; it’s very captive in a way. Digitally, I just feel like we are exposed to so much content. I appreciate the escape that’s involved with print.”