Bon Appétit Variety Show Raises $200K for Charity—and Thousands of New Subscribers
While the show benefited the World Central Kitchen, the magazine also generated 2,800 subscriptions last weekend, more than it sold in all of May 2019. 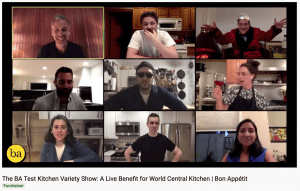 A variety show put on by Bon Appétit‘s test kitchen staff Friday evening, live-streamed on YouTube and benefiting the World Central Kitchen, was loud, silly, at-times chaotic, and in the end, remarkably effective.

Nearly 500,000 viewers tuned into the show at some point during the two-hour broadcast, which raised $52,000 in its first 20 minutes and a total of $196,960 as of Wednesday afternoon (donations are still open).

Conferencing in from their homes in New York City or locations as far-flung as Texas, Mexico and Long Island, the magazine’s roster of test kitchen personalities routinely popped in and out over the course of the two-hour broadcast, which featured a cocktail tutorial, live competitions, a reader Q&A, check-ins with several staffers’ pets and a supercut of editors chopping onions while being forced to read the lyrics of Britney Spears’ “Lucky,” among other segments.

Supported by sponsors Bush’s Beans and Dawn Powerwash, and with YouTube covering transaction fees, all of the money raised will go directly to the World Central Kitchen’s COVID-19 relief efforts, which involves distributing individually packaged, fresh meals to children and families that need support as well as seniors who are unable to venture outside.

“We not only wanted to raise funds for a deserving organization in need of them, but we wanted to provide our dedicated, supportive fans with something they could look forward to during these monotonous days and weeks of quarantine,” says Bon Appétit editor-in-chief Adam Rapoport.

It was an effort weeks in the making, as a dozen producers worked behind the scenes, coordinating each live shot, communicating with editors through earpieces and shuffling them in and out of “virtual green rooms,” Rapoport added.

And while far from the primary focus of the evening, another beneficiary of the broadcast was Bon Appétit‘s print magazine. A brief shoutout by Rapoport about a half-hour into the broadcast, teasing the upcoming June/July issue and encouraging viewers to subscribe using a link in the video’s description, directly drove 850 new subscriptions, a Condé Nast rep tells Folio:.

In total, Bon Appétit received 2,800 new subscription orders from Friday to Sunday, the highest three-day total in its history and more than it received in the entire month of May 2019.