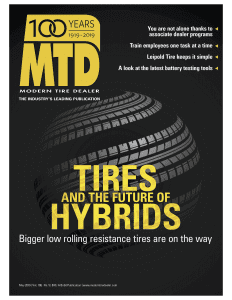 Included in the sale are Auto Service Professional magazine—a bimonthly with a print circulation of 130,000, according to its media kit, which would make it the largest title in 10 Missions’ portfolio by that metric—as well as 100 year-old Modern Tire Dealer magazine, a monthly with 35,000 qualified print subscribers, and the Dealer Strategic Planning Group, a peer membership and training platform for tire dealers.

Bryce Evans, VP of content and events at 10 Missions Media, declined to share the financial terms of the deal, but tells Folio: that the acquired properties will continue to operate out of their current location in Uniontown, Ohio and that the existing teams will remain in place, adding that 10 Missions plans “to keep the publications running as is.”

In a press release, Greg Smith, publisher of both Auto Service Professional and Modern Tire Dealer at Bobit Business Media, called the sale “an exciting new opportunity for our publications,” noting the “numerous benefits shared across all our brands in the 10 Missions Media family.”

“Adding such well respected and trusted brands to our mix not only allows us to expand our reach, now covering the entirety of the automotive aftermarket, but it also provides us with the opportunity to grow in our mission of improving the lives of our readers,” added 10 Missions Media president Jay DeWitt in a statement.

DeWitt first launched FenderBender, a glossy magazine for collision repair shop owners and the cornerstone of what would eventually become 10 Missions Media, in 1999. The company’s other titles include eight-year-old Ratchet+Wrench magazine, 34-year-old National Oil & Lube News, which 10 Missions acquired in early 2019, and ADAPT, a digital outlet and annual summit serving the automotive aftermarket, which the company launched in October.

The sale of the automotive aftermarket division, which leaves Bobit with about 20 remaining publications split across four divisions, comes a year-and-a-half after the company’s acquisition by private equity firm Gemspring Capital, a deal which ended 57 years of Bobit family ownership.

Since then, CEO Richard Rivera, CMO Paul Andrews and CFO Anthony Shepherd, all of whom joined the company after the Gemspring acquisition, have each left to take on new positions at other companies, as has COO Cyndy Drummey, who had been in that role for several years prior to the sale. The company has yet to publicly announce any new hires to succeed those executives. Sherb Brown, previously VP and group publisher of Bobit’s automotive fleet division, has been serving as president and CRO since the sale.