Bob Mankoff Fills Us In on His Latest Project, Cartoon Collections
We sit down with the acclaimed humorist and cartoonist to learn more about the recently-launched brand. 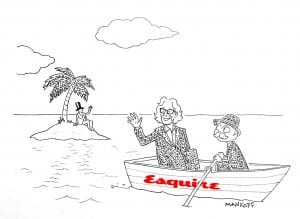 Bob Mankoff surprised the industry in 2017 when he left The New Yorker after a 20-year run. The magazine’s cartoon editor made his mark for his uncanny ability to curate impactful and timely cartoons on a weekly basis. In fact, his role on the magazine even inspired the 2015 feature-length documentary “Very Semi-Serious.”

But even though Mankoff’s run at The New Yorker has ended, his work as a humorist and cartoonist has not. Shortly after he departed the storied Condé Nast’s brand he joined Esquire as its humor editor. But that’s not all he’s been up to.

Part of his decision to move on from a role many might consider a dream job was that Mankoff wanted to launch a business that could not only be viable, but also help support a craft he loves so much. With that came Cartoon Collections, a website that celebrates the form and the sells licensing packages for more than 500,000 cartoons, with dozens of legendary cartoonists, from iconic brands like The New Yorker, Esquire, National Lampoon and Barron’s, plus CartoonStock’s entire archive.

We wanted to learn more about Mankoff’s ambitious new venture, so we sat down with him to hear more.

Folio: Talk to us about where the idea for Cartoon Collections came from and how it initially came together.

Bob Mankoff: I first came up with this idea it in the early ’90s with Cartoon Bank. The purpose was to have an archive of cartoons on any topic for whatever somebody might need.

I started it with 25-thousand cartoons that The New Yorker rejected from various artists. As cartoon editor we had to reject a lot of cartoons, but I thought we should have a place to keep all of them. The New Yorker runs 10-15 cartoons every week, but most of them are going to be rejected. Not because they’re bad, but because there are only so many spots in the magazine. I thought we should make use of all the stuff that’s being rejected. 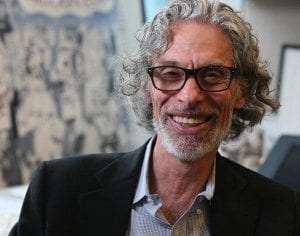 We launched the website in 1997, and Condé Nast made me the president, and I ran it for 10 years. We did well and made money, but the company thought lawyers would be better off running it.

By the time I left The New Yorker last year, the site had become a shell of its former self.

Cartoonists used to make 20- to 30-thousand dollars a year in licensing fees, now it’s become a tenth of that. So when I left I said, ‘Ok, why not do it right? But also do it bigger and better.’

The collection isn’t just New Yorker cartoons, it includes Esquire, National Lampoon, Playboy, and others, plus we’re going to keep importing more from the golden age of cartoons. And to also help make it successful, we acquired CartoonStock, which is an online archive with a half-million cartoons. Now that we’re launched we’re going to reach out to other places who have resources.

Of course, we also needed more than a website, so we hired a staff, and are going to be adding a sales team.

Folio: What did it actually take to launch the site and make this a business?

Mankoff: The process was pretty complicated. Like I said, when I left The New Yorker I knew I wanted to do this and I knew the cartoonists wanted me to do it—92 signed on. I also knew I would need a team. Anybody can create a website or buy software. But how do you make sure people are going to be there?

I had my eye on CartoonStock for a long time. They had traffic and were a viable business and they were selling cartoons. I knew the guys, so we began the process of negotiations to buy them, but it took a long time. After we acquired them we started building the site because they gave us the proprietary technology we needed.

Developing the contracts with all the cartoonists was the next phase. A big part of building those relationships was making sure they knew it was a non-exclusive opportunity. They trusted that I was a guy who knew about cartoons and could help them make money.

Folio: So exactly how do the licensing partnerships work?

Mankoff: It’s case-by-case basis. For instance, with The New Yorker the cartoonists own the assets. Some of the cartoonist didn’t know that and I had to explain that to them. Same with Esquire, but we couldn’t have access to the archives to make them available. But since I’m with Esquire I worked out a deal and they get a cut in exchange for the traffic.

But most important, the artists always get 50 percent of the revenue [when their cartoons are sold].

Folio: How did you develop the pricing model?

Mankoff: The rate card is really based on how the cartoons will be used. If it’s for a PowerPoint, it’s $11. But if somebody is going to make money with it, for example in a textbook, then it’s $250. The rate card really worked out based on the experience we had with Cartoon Bank.

Folio: Who do you see as the typical customer?

Mankoff: Niche markets are very disbursed and spread out. Everybody has to get lunch but not everybody has to have a cartoon for a PowerPoint. So you have to reach out and figure out how to do it on a volume basis. You do that with marketing and technology. Textbooks are a natural market for us. All of magazines, and specifically Industry magazines, could benefit from all-you-can-eat access as well. Say somebody signs up and it’s $19.95 a month, if they need an illustration or cartoon they can get it immediately. We feel 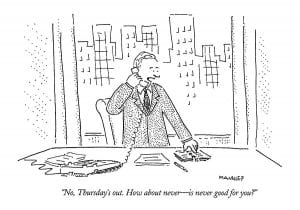 there are thousands of organizations who will buy into this model.

When you really want to communicate a point in a meaningful way, I think single-panel cartoons can do that better than anything.

Folio: How big do you think this business can get?

Corporations couldn’t run a business like this. They don’t love anything. People have lost sight of the fact that there are nice businesses out there, but not everything has to become Amazon, Facebook or Apple, but everyone is chasing that and tossing everything else aside.

Folio: What are your goals for year one, and then long term?

Mankoff: First, I’m obviously looking to make this a successful business that is profitable and gives money back to the investors. But I’m also looking for this to be an exception point that changes the industry for these kinds of cartoons and offers sustainability to the people who draw them.

Someday I would also like to have a print magazine that goes out to subscribers. It would be a publication with a circulation of probably around 10,000. We could make it profitable.

Folio: Despite some of the challenges print faces, you think cartoons have a bright future?

Mankoff: I think the future could be bright if the people running digital media were bright.

Folio: Something that seems to be missing from the site, is you. Besides your cartoons, do you plan on bringing your personal brand on the site?

Mankoff: Yes. Right now we are running a monthly caption contest, which I plan to write about once we select the winners. I definitely am going to leverage my brand and the other brands we have, but first I want to make sure we get the business right. 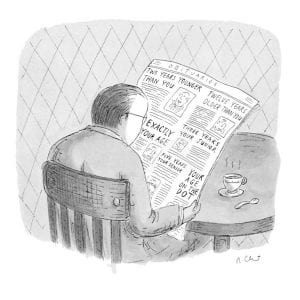 Folio: One more thing, let’s talk about the cartoons themselves since we have you here. What’s your favorite on the site available for sale?

Mankoff: That is so hard to answer. I think it’s a cartoon by Roz Chast, who usually does multi-panels, but this one is a single panel of a man reading the obituaries. So much of humor isn’t about what’s good, but what’s sort of bad. And there’s nothing worse than the thought of your mortality and that you aren’t going to be here in a little while. But that cartoon is so meaningful because it shows no matter how bad something is, we still egotistically, or narcissistically, focus on ourselves.