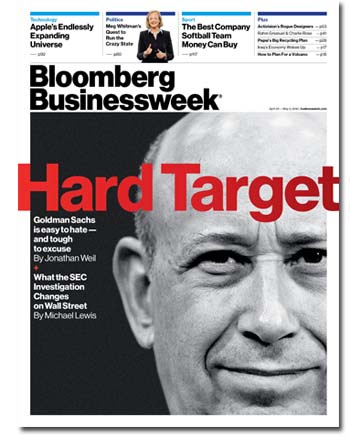 “This represents the integration of two great business brands,” says Bloomberg BusinessWeek president Paul Bascobert. “What we’re bringing out today is, I think, the most significant entry in the weekly business news category, with a goal of nothing less than becoming the most influential business magazine in the world. We look around the marketplace and see a great opportunity to delivery weekly business insight.”

Last year, BusinessWeek saw its advertising pages plummet 33.8 percent. Through the first quarter 2010, ad pages continued to fall, declining 18.7 percent compared to the same period in 2009. While it and other titles in the business/finance market continue to struggle, Bloomberg is confident that this relaunch poises BusinessWeek for continued relevance in a difficult market.

“When you look at the research about the people who decided to leave BusinessWeek, it really was that the value equation was broken for them,” says Paul Bascobert. “They felt that for what they were paying, the product kept getting thinner and smaller and less comprehensive. I think this is a radical reversal of that.”

According to editor Josh Tyrangiel, the redesign has altered the entire structure of the magazine to make navigation more logical. Now, each issue opens with an “Opening Remarks” column. Beyond the feature well, the new magazine is divided into five sections: global economics, companies and industries, politics and policy, technology, and markets and finance. “There are a lot of stories in this magazine,” Tyrangiel says. “We hope that everyone will read every word but we’re aware that not everyone will. We need to make sure we need to reach the reader and customers on their terms.”

In addition, Bloomberg BusinessWeek is increasing its editorial folio from 55 to 66 (with “double” the number of news stories), is increasing its paper weight from its previous 28 lbs. and is hiking frequency from 47 times annually to 50. The $4.99 cover price will remain the same.

“We’re trying to reach the whole business person,” Tyrangiel says.” We trying to be comprehensive, surprising and even seductive.”

Despite the number of layoffs the magazine suffered earlier this year after being taken over by Bloomberg (more than 100 people were let go) Bloomberg says BusinessWeek is leveraging the massive editorial pool of Bloomberg News (namely 146 bureaus in 72 countries). “I’m working with a lot more people now than I would anywhere else,” says Tyrangial. “The real challenge is making sense of it all.”