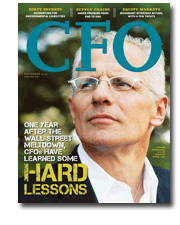 FOLIO: first reported in September that The Economist Group was quietly pursuing a buyer for CFO.

Under CFO’s new management plan, general manager Frank Quigley will become president and CEO. Quigley did not immediately return a request for comment.

Seguin managing partner Martin Madden could not be immediately reached for comment. In 2001, Madden and Seguin operating partner Alan Glass (then under Bariston Partners) acquired a majority stake in The Economist Group’s Journal of Commerce, which was sold again in 2006 to United Business Media for $152 million.