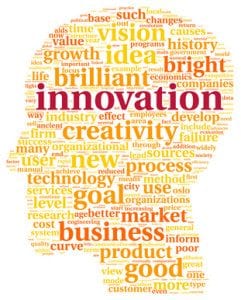 VANCOUVER, B.C.—Publishers have been taking a hard look at several novel revenue opportunities, some borrowed from other industries but each representing incremental growth potential when spun on a magazine axis. At the recent Content Opportunity Expo, executives from large legacy groups and digital startups alike marveled at—as the expo slogan put it—“The Future of Yikes!”

“I’m kind of gobsmacked, if I’m going to be honest,” said a CRO at a global publishing company. “Some of these ideas weren’t even on my radar.”

She said as much on the trade show floor next to a booth hosted by Tattoodle-Oo, which etches so-called “micro content” on a reader’s skin. The Romanian company pioneered mass body art with its patented InkLink technology, broadcasting low frequency radio signals that ping nearby retailers and invite geo-targeted advertising directly to a wearer’s smart device.

“It’s a two-fold revenue play,” said Tattoodle-Oo sales director Bogdan Nicolescu. “The tat itself is essentially out-of-home, and the RFID signal is a value-add for advertisers wishing to redirect retail prospects out in the wild.”

Magazine media, Nicolescu claims, represents perfect synergies, adding brand equity to a new segment while also offering youthful cachet to older-skewing titles. “And in the most organic way. Skin is an organ, am I correct?”

He said a pilot contract with 87-year-old Family Circle was “looking quite promising” until it was announced that the title was shuttering at the end of the year. Indeed, at the Expo, a line formed early each day for a look at the technology. In Bucharest, according to Nicolescu, the penetration of Tattoodle-Oo is so great that the aggregated wireless traffic has jammed some police frequencies. “Helter skelter, man,” he smiled. “I love it!”

At a sponsor lunch on the Expo’s second day, more than 800 execs filled the room to hear a presentation from BackChan. A startup founded by the principals of the now widely de-platformed 8chan internet community, it offers publishers carriage fees in exchange for embedding 8chan message boards on their websites through what it calls a Back Channel Content Management System. For those who find hate speech, QAnon conspiracy theories, white nationalism and incel incitement “a little too much of a hot potato,” said CMO J.D. Anonymous, “it’s really a non-issue, because all of that content is encrypted and visible only to subscribers with credentials.”

“I like it,” said one senior digital officer of a group of sporting and leisure verticals. “I mean, we certainly believe in the First Amendment. We’d just be a sort of common carrier for free speech, and our readers and advertisers would be none the wiser. We’d monetize our reach in a very brand-safe way. And I think it’s a service to the Nazi and crackpot segments of our audience, who would kind of get to double-dip on our platform.”

And though BackChan never pitched this potential application of its technology, the executive wondered if there might be an even more lucrative opportunity to bring additional advertisers into the fold.

“Silk Road is history, obviously,” he said.  “That prosecution totally shut off access for certain marketers to an audience cohort very much flush with discretionary income. Why can’t our titles—or at least the unseen plumbing of our titles—be a channel for these specialty brands to reach their prospects? Again, who would know? I mean, we do native advertising all the time in full public view, and we’re gonna turn our nose up to a few rocket-propelled grenades? Come on. Get off your high horse.”

For many of the 1,000 registered attendees, though, the highlight of the event was the day trip to the Whistler ski resort, hosted by the embassies of Uzbekistan, Myanmar, Turkmenistan, Cuba and the Democratic People’s Republic of Korea. Delegates received a lift ticket, equipment rentals and a photo op with keynoter Mohammad bin Salman bin Abdulaziz Al Saud of Saudi Arabia.

The title of his presentation was “S.O.S. from MbS,” and he said a whole underclass of nations needed assistance in telling their stories.  “We need help,” he said, “from people who know what it means to feel ravaged by modernity.”

This triggered a long round of applause, after which he offered his proposition: a paid supplement—print or digital, for any title that wishes to participate—that will highlight the “fascinating history, culture and forward-thinking leadership of some of the most exotic nations in the world.”

Branded “Bonesaw,” the title-within-a-title would tell what bin Salman called the “untold story, with a bit of a wry voice, gorgeous artwork, and no room whatsoever for dissent.”

“We’re just a startup,” he said, “so we can only offer you $16 per subscriber to participate.”

Nobody skied in the afternoon. The reception line strung out the door.