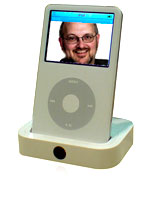 Ron Wall, SVP of publishing at Canon Communications, shares a great story of how he beat a "print ads are dead" objection raised by a client by making him an offer he had to refuse.

The client told Ron that print ads were not responsive and therefore of little value. Ron countered by offering a free spread in his magazine. But there was a catch. The ad had to make an offer, have an 800 number, and anyone who called even just to inquire about the offer would get a free iPod.

The offer of a free spread got Ron’s client thinking. What would the offer be? How many callers would buy as result? How many iPods would he have to give away? Whoa! A lot of free iPods!

As the client did the math and considered the number of people who might call to get a free iPod, he realized it could run into hundreds or thousands. The client started backing off from Ron’s offer. Then Ron, with a twinkle in his eye, said, "But wait a minute, didn’t you just say print advertising is not responsive?"

Ron’s point, that the right print ad can be very responsive, had been made. Print is not dead, and print ads can generate response as long as they are designed with a compelling offer. Great story. Thanks Ron!