Movie Bloggers Call for Boycott of Variety, Hollywood Reporter
Battle over links/attribution should prompt other publishers to develop policy. 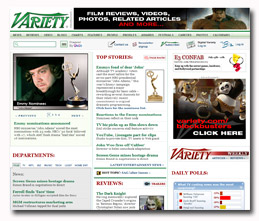 Few industries have as many (or as widely-read) blogs and independent sites as the entertainment industry. Now Variety and Hollywood Reporter have drawn the ire of several independent movie blogs, which claim the sites have taken news from the blogs without attribution and are now calling on the blogging community to stop providing links to the trade sites.

Collider.com editor-in-chief Steven Weintraub called for the boycott, which has been joined by Moviehole.net, Latino Review, ScreenRant.com, IESB.net, Bloody-Disgusting.com and FirstShowing.net, after he claimed Variety picked up what he says was his scoop about a sequel to the movie "300." While acknowledging that much of the news found on the blogs comes from Variety and HollywoodReporter.com, MovieBlog.com writes: "So here’s an ironic thing. Many traditional media outlets will often belittle and criticize the new emerging online movie community for not having explicit codes of etiquette and conduct … and yet now many of them are engaging in the violation of this most simple and important rule of GIVING CREDIT."

Many of the blogs supporting the boycott are filled with comments from readers supporting the stance and talking of the irrelevance of big media but some other bloggers aren’t so sure. "Movie sites have been ripping off Variety and Hollywood Reporter for well over a decade now," wrote FilmRot. "How many articles a day do you think get quoted, reprinted in whole, unattributed or attributed without a link – all from the Hollywood trades?"

Publicly, Variety has been dismissive of the boycott. "Print still holds its own," Variety editor-in-chief Peter Bart told MTV.com. "With all the [Internet change], the circulation of Variety is just where it was 30 years ago."

Still, Bart tells MTV.com there’s still an opportunity for the trades and the blogs to come together. "I think we’ll grow together. I really do and I think to some degree we want it. I would like to have us develop a blog of blogs, where we get a highlight reel of the best blogs that deal with the entertainment media. I think that will happen before long, and I think that would ameliorate some of these concerns."