Automation: A Necessary Criteria For Success In Print
Publishers need to automate any task that does not require creative input.

The recent closing by Condé Nast of Gourmet and three sibling magazines, the shuttering of Country Home by Meredith, and the bankruptcy filing by the owners of Reader’s Digest, were sobering events for anyone in the publishing world. And the list of troubled or failing newspapers has increased dramatically in the past few years, fueled by the continued decline in both circulation and advertising, which is a cause of grave concern for survivors.

To be sure, there were systemic problems that none of these failed publications could address in terms of the recession, falling readership, rising costs and the like. One issue that must be confronted by publishers moving forward is the notion that Web distribution should be free (I contend it’s economic suicide).

Another issue that gets less attention is automation. Whereas the production folks in typesetting departments and the pressroom have had to accept the impact of technological advances on their respective crafts, art directors, managing editors, ad trafficking managers and other personnel responsible for assembling publications have maintained relatively stable workflows since the adoption of desktop publishing technologies some 15 years ago.

As someone who spent more than a decade writing, editing and assembling publications, I grew to love the creative interaction between art director and editor, the iterative process that resulted in a well-designed magazine. 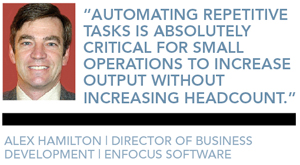 However, the stark economics of 21st century publishing have left those fond memories in the dustbin of history. Today, publications have to automate any task that does not require creative input or some sort of judgment. I would contend that automation is increasingly going to be a necessary criteria for success and even survival in print-based publishing.

Among the tasks that can be automated are file reception, image preparation, initial page layout, ad trafficking, preflight and insertion, proofing/approval cycles, final file transmission to the printer, and archival.

In the interest of full disclosure, I am the director of business development for Enfocus Software, a software company that sells a publishing automation application. However, we are offering just one approach to this issue.There are several approaches that can be used, all of which are viable and which will fit different environments and budgets.

So what does automation mean? In broad terms, there are three types of automation for publishing and graphic arts workflows: first is related to standardization of tasks—making people play by the rules. Such an example might be an Apple Script that requires a job ID that is validated (i.e., five digits starting with a ‘3’) which is then entered into a database.

Next is what might be called the one-trick pony: a script or action that performs a single task in an application. It might be a utility that converts native design file to PostScript or EPS and drops it into a Watched Folder for Distiller, then moves it to an archive folder.

The most complex is process automation in which multiple steps are linked in sequence according to either fixed or dynamic rules. Fixed rules means that every file is processed the same way—i.e. an InDesign file is converted to PDF/X-1a for output compliant with SWOP, preflighted using a particular profile and then sent to a folder for either review or forwarding. Dynamic rules require instructions—most likely in the form of XML—to accompany the data file and outline the sequence of tasks and the specific details performed by each one. Here the instructions might link text and image files to a page layout template, then generate and distribute a low-res PDF for review and revision; if and when it is finalized, the file is then automatically distilled for final output and FTP’d to the printer, and archived to a server or off-line media.

Stick to the Scripts

Given the prevalence of the Macintosh in publishing, Apple Script and its sibling, Apple Automator, are likely to be implemented most. Complementing these are JavaScript, which is platform independent, and Visual Basic for the Wintel platform. All offer an incredibly inexpensive and flexible way to automate numerous tasks in a publishing workflow for either of the first two categories mentioned above.

If your operation is using a database application such as FileMaker Pro along with the Adobe Creative Suite, you can assemble a number of template-driven publications and catalogs. To be sure, there will be “tweaking” required to finalize the layouts, but you can eliminate hours of work importing text and images.

Automator is another tool that costs nothing other than time and which can perform plenty of useful tricks. One is archiving final files. Image preparation is an area in which the human need to touch and interact needs to be reined in just a bit. I am not talking about image retouching, but image optimization and preparation. In this case there are several tasks that can help the art director. First is teeing up images: copying originals and making a thumbnail and/or a low-res RGB for layouts and the web. In addition, while there is a strong case to be made for using an RGB workflow all the way to final RIP/output, the vast majority of publications are still using a separated workflow in which the final PDF contains CMYK images. In addition to writing scripts for all of these tasks, users can create Photoshop Actions for many of them which can then be run in batch mode.

Ad trafficking lends itself to automation, too. Incoming ads can be routed based on source (e-mail address or FTP site/folder) or naming conventions and then renamed or slugged using scripts. Once an ad has an ID, it can then be automatically inserted into page templates.

So what’s the downside to scripts? Maintenance. Since all software is subject to upgrades and revisions the scripts most often need to be revised when new releases come out. Closely related to this is the custom nature of scripting: if the person who wrote the script leaves the organization, so goes the software maintenance, too. In some cases, this might raise intellectual property issues, but the real problem is that the scripts have a bad habit of breaking when the next release is installed, as anyone who has migrated along with the Adobe Creative Suite can attest. Typically this happens because resources get “moved” inside the application.

From Start to Finish

Process automation requires the most analysis, planning and investment, but delivers the greatest return on investment. Editorial systems such as K4, Typefi and Woodwing, coupled with digital asset management databases and other tools, can automate much of the page layout process while providing high degrees of flexibility.

Closely related to this are systems that address other tasks in the workflow. Among these are DALiM TWiST and Enfocus Switch, both of which fall under the category of rules-based automation systems. While they work in different ways, both enable production managers to build customized workflows that automate file reception and routing, image preparation, page processing, PDF generation, preflighting, proofing, final delivery and archival. With these server-based applications, either a job ticket (XML or a derivative such as XMP or JDF) defines the steps and processes, or a fixed pipeline pushes files from a point of “entry” to completion.

For printers, there are numerous production systems, including ECRM WorkMates, EFI Fiery Central, EskoArtwork Odystar and BackStage, Fujifilm XMF, Kodak Prinergy, Rampage, Xerox FreeFlow ProcessManager, and Xitron Navigator and Sierra. As one would expect, these systems’ capabilities are more focused on the final output requirements, such as imposition, process and spot-color separations, trapping, RIPing and screening.

Common to all of these systems is the ability to build notification lists of internal and external personnel to facilitate review/approval cycles or, in the event of an error, get the process back up and running again.

So, what’s holding you back? Many operations, especially smaller ones, typically say they don’t have enough volume to justify automation. Or they say that the tasks don’t require much time. In some cases, people have built workflows that are intended to save their jobs.

However, these arguments will succumb to the almighty dollar, as the operation or position becomes economically inviable. Automating repetitive tasks is absolutely critical for small operations to increase their output without increasing headcount (or the workday for employees). Publishers will increasingly be unable to afford the aggregate cost of myriad 30-second to two-minute file manipulations.

There are multiple options at a variety of price points available to publishers, ad agencies and printers to automate numerous tasks. No matter which approach you settle on, there’s no time to waste.