The Atlantic Debuts TheAtlanticCities.com
Dow is the exclusive sponsor for new hyper-local site. 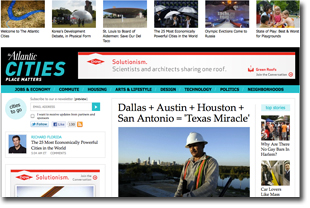 The site is led by former DCist.com editor Sommer Mathis and features the work of economist, professor and Atlantic senior editor Richard Florida (who is on TIME Magazine‘s top 140 Twitter feeds with more than 130,000 followers).

"About a year ago we started looking at how the crash was going to reshape American cities and we found that Rich’s work in print was very smart and popular, so we began investigating whether there was more we could do," says Bob Cohn, editorial director of Atlantic Digital. "This is a big editorial opportunity and a big business opportunity. There are a lot of good b-to-b websites in this space but in the consumer space, only a few large brands like The New York Times and Wall Street Journal did an occasional story. There weren’t consumer sites dedicated to the topic of cities and suburbs."

Features include The Big Fix, a weekly exploration of how cities attempt to solve problems; Democracy in America and Why I Love My City, as well as one-stop landing pages for select U.S. and international cities, with data and Florida’s city and state rankings on topics ranging from the healthiest places to live to best cities for recent college graduates.

Dow is the exclusive launch sponsor for TheAtlanticCities.com. "We didn’t go out originally trying to sell this as a single-sponsor project, but Dow is heavily invested in this space and was willing to make a significant commitment," says vice president and publisher Jay Lauf.

The sponsorship includes a content series on the site called "Progress of Urban Development" that features daily posts (labeled as sponsor content) for the first month of the launch and an expandable mobile unit on The Atlantic’s iPhone and iPad apps. It also helped anchor a print buy in The Atlantic. "This started as digital-only concept but the magazine edit staff was planning a gatefold in the October issue with an infographic on the topic of cities, so Dow bought back into the print edition," says Lauf.

While he wouldn’t offer specific pricing information, Lauf says that counting the print buy, the Dow sponsorship is one of the most significant advertising deals of the year for The Atlantic.

Through the first half of 2011, The Atlantic says digital advertising was up 23 percent.