‘Any Respectable Magazine Should Be Doing a Little Retouching’
Newsweek slammed for not Photoshopping Sarah Palin. 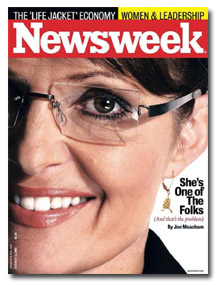 The magazine industry is no stranger to Photoshop controversies, but this is a first.

During a discussion about Newsweek’s Sarah Palin cover on—what else?—Fox News, Andrea Tantaros, a Republican media consultant, said she is outraged over the cover because—get this—Newsweek opted not to retouch Palin’s photo:

Fox News’ Megyn Kelly: “Any respectable magazine should be doing a little retouching.”

I felt compelled to consider Bill O’Reilly’s argument that Newsweek under editor Jon Meacham has swung far to the left. But to condemn Newsweek for not retouching a photo, viciously exposing—wait for it—pores is, frankly, insane. It’s a bleeping news magazine!

This debate, by the way, wasn’t merely relegated to off-hours on the Fox News Channel—Tantaros appeared last night on CNN’s Larry King Live to make the exact same argument.

"What do you think about Palin’s pores, gang?"