AMMC: Diversification is Magazine Media’s Continuity Plan
Celebrating 100 years of the MPA, magazine leaders discuss how they're modernizing their portfolios and engaging audiences of their legacy brands. 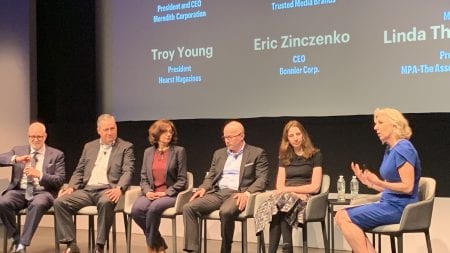 NEW YORK — Engaging audiences, diversifying distribution and customizing data were on the top of attendees’ minds at the MPA—the Association of Magazine Media’s 2019 American Magazine Media Conference on Tuesday.

The event was held this year in the intimate Henry Luce Auditorium, named for the storied magazine publisher, at Meredith Corp.’s 225 Liberty Street offices in lower Manhattan, which was was previously Time Inc.’s headquarters. And while the audience was made up primarily of magazine media professionals, magazines were not talked about as much as you might expect.

Tom Harty, the newly appointed chairperson of the MPA and president and CEO of Meredith Corp., opened the show by igniting the idea that magazine media brands are the original influencers, a theme that stayed prevalent in most of the day’s presentations and panels, including the first session, an interview with Martha Stewart.

InStyle editor-in-chief Laura Brown began her discussion with Stewart talking about “the formula for relevance” and how Martha Stewart Living, Martha Stewart Weddings and her many other brand extensions have changed and expanded over the years as she figured out how to both modernize and monetize.

“When I started the magazine, I remember clearly that when I mentioned the word synergy, it was a dirty word. And now, if you don’t believe in synergy and integrating your information into everything like TV, digital, online and everywhere, you can’t survive,” said Stewart.

An original influencer herself, according to Brown, Stewart’s been able to engage audiences for decades from her 93 published books—of which, Stewart says 100th will be an autobiography—to her VH1 TV show with Snoop Dogg, “Martha & Snoop’s Potluck Dinner Party.”

Her advice to the other magazine publishers in the audience is to embrace the industry disruptions: “As an early adapter of all things digital and technological, I think we just have to continue to do that and we never know what else is coming, but you should keep your eyes open and work within it. You can’t avoid it.” 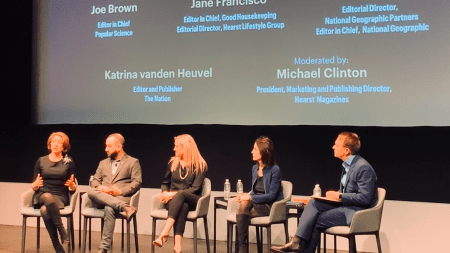 During the Secrets of the Centenarians panel, the top editors from Popular Science, Good Housekeeping, The Nation and National Geographic, which Stewart says she modeled Martha Stewart Living‘s captions and photography off of, discussed how they’ve kept their 100-plus-year-old brands successful without becoming out-dated.

“100 is the new 60,” moderator and Hearst’s president of marketing and publishing director Michael Clinton said as he introduced the session and poised the question, why is a century-old legacy an important tool to wield?

But part of Goldberg’s recipe for success within the 21st century, is clearly defining the wrongs of the magazine’s past in order to maintain the trust of all readers as well as continue growing audience engagement within new generations.

“We did a package on race because the racial conversation in the United States has become so poignant,” she said. “But one of the things we had to do to do that credibly, I thought, was acknowledge our own very complicated past with race. We had to own that history over 100 years, and in a case like that, 100 years does matter, but then you can tell people what you’re doing now to change that.”

For the other centenarian publishers, revenue diversification has been the backbone for continued growth, whether it’s through e-commerce and retail or tackling other forms of media, like television.

“I think audience engagement for the people sitting up here continues to be our primary focus. But at the same time, we’re involved in a business where we try to convert that into revenue,” said Good Housekeeping‘s editor-in-chief Jane Francisco, who said that the GH brand was one of the first to the table for consumer advocacy, even pre-dating the FDA.

Goldberg continued that even though National Geographic has the TV channel, a trips business and more, all of which she says support each other, being able to monetize digital is the problem they’re continuously working to solve.

“I don’t think there is any shortage of audience that wants to read deep, rich, fact-based, science-based content. We can get those eyeballs. It’s how do we monetize those eyeballs on non-print platforms,” she says. “We’re seeing an enormous hockey stick of growth in revenue on those digital platforms, but it’s still not as profitable as it ultimately will need to be.”

One specific lesson Joe Brown, Popular Science’s editor-in-chief, has learned during his time in the industry is that brands, especially ones with trans-generational audiences, no longer need to focus on bringing them all together in one location to achieve monetization.

“I know there used to be this desire to drive everybody to your website, or when they’re on your website, drive those people to become subscribers to your magazine,” he said. “That’s not the case anymore, because when it comes to the digital platforms, we don’t know how the views are going to change tomorrow. So we have to be diversifying our ability to attract readers across all of digital.” 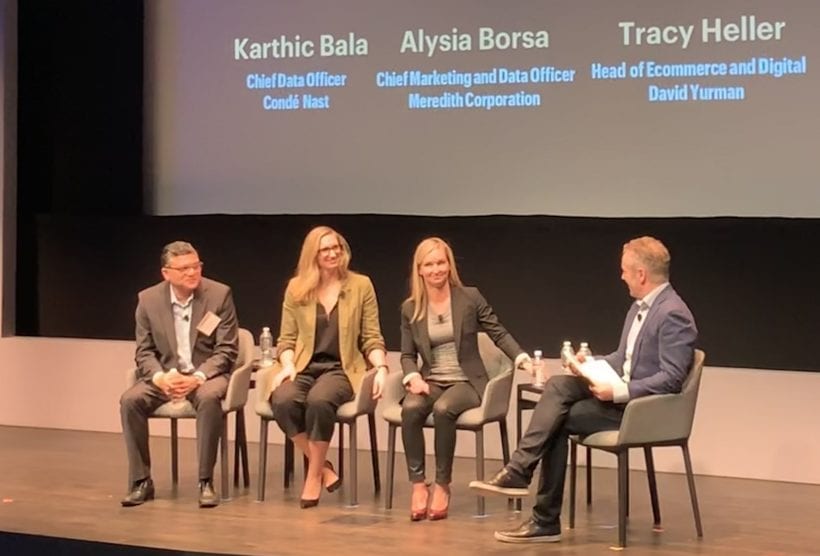 On the data-side of meeting readers on the platforms they engage the most on, Condé Nast’s chief data officer, Karthic Bala, and Meredith’s chief marketing and data officer, Alysia Borsa, discussed how they’re working to customize those platforms to the individual reader, and not just the broader generational and demographic identifiers that readers have been sorted under, in the Data and Consumer Trust panel.

“I don’t want someone to just read something, I want them to take an action,” said Borsa.

And to do this, she says Meredith has been experimenting with Artificial Intelligence in order to predict its readers’ intentions. So a 30-something year old female reader of Better Homes & Gardens, who’s known to be interested in gardening and cooking healthy recipes, may decide that it’s time to plan a vacation for her family, and Borsa says she wants Meredith to be right there to help her make those vacation decisions.

“We want to be with them on that journey and then hone in on the moments where they’re going to take action,” said panelist Tracy Heller, the head of ecommerce and digital for jewelry designer David Yurman, a notion that both Bala and Borsa said applies in the magazine media industry.

And in order to better support the user experience at Condé, Bala said that giving readers a unified experience, personalized to them across all of the company’s brands is a big priority for his team, especially now with the planned in implementation of paywalls.

On Instagram, specifically, brands like Vogue, Cosmopolitan and Italian-based Freeda Media, have harnessed the data and engagement they’ve received from their millions of followers to find new ways of driving revenue.

Head of brand marketing Negar Mohammad explained how Vogue used the Instagram Stories’ swipe-to-buy feature to reveal the September 2018 cover and link to the brand’s Amazon pre-order page, which ended up selling out the initial run of pre-orders sales in one day. Later, the swipe-to-buy feature was attached to a general magazine subscription sign-up page, and Mohammad said that 20 percent of Vogue’s total subscriptions were tied directly to their Instagram Stories ad.

Elsewhere in the luxury media world, Bahram Akradi, CEO of the fitness, co-working and residential living company Life Time, talked about his decision to expand his brand into magazines in an interview with ESPN the Magazine editor-in-chief Alison Overholt. And ABC News correspondent Bob Woodruff spoke about the need for credible journalism, particularly when unattributed information circulates on platforms such as Facebook and can lead to misinformed audiences.

Later in the afternoon, Campbell Brown, global head of news partnerships at Facebook, addressed some of the issues that publishers are experiencing with audience engagement following the algorithm changes that “cracked down on clickbait.”

“Facebook cannot be the entire solution of your problems,” she said, explaining that brands now built solely on the Facebook distribution will likely struggle. “We created the incentives that helped to create clickbait,” but the method of producing a short viral video won’t work anymore, says Brown. “We have cracked down on clickbait and cracked down on sensationalism. It’s not what people want to see.”

A trend that Facebook is also working to support, but is still in the testing phase of, is working with publishers who have taken on  paywalls and subscription models. Brown says that this is the path she is seeing publishers go down now and says that her team has to be committed to supporting that.

Actor and author Henry Winkler’s session on legacy, lessons and longevity foreshadowed some of the themes in the last session, when he said, “Tenacity and gratitude get you where you need to be.”

Working to secure and build on brand loyalty, CEOs and leaders from some of the top magazine media companies in the U.S. discussed the future the see for the industry and how building on audience engagement is a top priority.

“Badge media rings true,” said Zinczenko. “We have the data and research to prove that readers do define themselves by their passions and interests.” One example he gave of this is that at Bonnier, there are instances when the company has both the number one and the number two media brands within a vertical, like Cycle World and Motorcyclist within the motorcycle enthusiast space. “And I can tell you, badge media is taken very seriously because you can have two consumers who are passionate about the same thing, but they don’t want to be identified by the other brand in the vertical,” he said.

Wasserstein closed out the session echoing the common thread throughout all of the day’s sessions, “Consumers are hungry for those trusted relationships and that’s on us to continue to take that very seriously.”