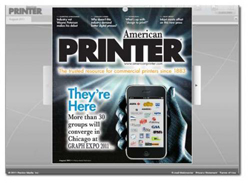 Started in 1883 as Inland Printer, Penton Media’s American Printer magazine will be stopping production after 128 years. The August 2011 edition has been the last title published.

The announcement came Friday in the form of a blog post from Katherine O’Brien, editor of the magazine.

"There won’t be a September issue," she wrote. "Penton, our parent company, stuck with us through some mighty lean months, but ultimately, there was no foreseeable model to achieve profitability. (Many of our readers are all too familiar with this problem.)"

American Printer at the time of closing had about 47,000 subscribers and overall circulation is about the same, according to a Penton representative, though the title is not audited by the Audit Bureau of Circulations. Page views are held at about 40,000 and unique visitors are about 22,000.

This b2b trade publication was designed for an audience of commercial printers and had a focus on printing management, press technologies and "prepress, press and postpress issues," according to its website. Industry trends, product introductions and real-world solutions for boosting profitability and production were among the topics covered.

Subscriptions to the free publication could be accessed in print and digitally (pictured) and an e-newsletter was also available along with a video library on AmericanPrinter.com and readers could subscribe to American Printer TV through iTunes or an RSS feed. The publication had 569 Facebook fans and 2,226 Twitter followers.

"I’ll miss American Printer," Facebook fan Julie Shaffer posted Friday afternoon. "The print version’s been getting thinner and thinner so this is not shocking, but still sad."

Meanwile, Gordonsville, Virginia-based printer American Press has also folded, citing economic conditions in the printing industry over the last three years that have left the company no longer economically viable. The decision was made in June, with operations gradually phased out over the summer. American Press had 123 employees, with print runs ranging from 30,000 to 2.5 million (with a sweet spot between 50,000 and 250,000).