All You Makes a Big Change on the Newsstand
Amid flagging newsstand sales, All You expands single-copy distribution. 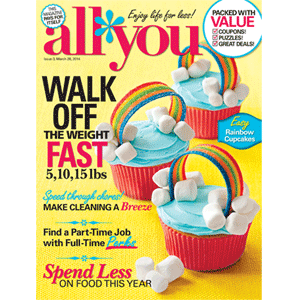 Time Inc.’s All You is broadening its distribution, moving beyond the exclusive newsstand deal it had with retail giant, Walmart.

The April issue of the smart-shopping magazine will be available at major retailers across the country, including Target, CVS, Walgreens and Barnes & Noble.

Citing a spike in bargain hunting and multiple-store shopping, All You says it’s trying to capitalize on the demographic.

"Recognizing this cross-shopping behavior, All You is expanding distribution to meet the needs of this growing population and realize untapped consumer demand," says Suzanne Quint, the magazine’s publisher, in a statement. "With our expansion we’re looking forward to reaching more consumers wherever they shop and continuing to drive sales for marketers."

All You has done well with circulation as a whole—it’s rate base increased 50,000 to 1.55 million in January; subscriptions are at an all-time high—but single-copy sales have been trending downward.

After a peak of more than 485,000 in 2011, average newsstand sales dipped to just 320,000, according to the most-recent Alliance for Audited Media report. Despite the 35-percent drop, the magazine still ranks 14th among consumer titles at the newsstand.