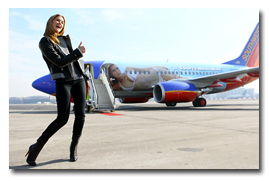 Here’s when a magazine marketing idea that sounds good on paper can backfire.

Southwest Airlines is taking some heat over the steamy picture of Sports Illustrated swimsuit issue cover model Bar Rafaeli splashed on the side of one of its commercial 737s.

“I find this tacky and somewhat offensive,” wrote another. “I am a twenty-something male, and I would not want to have to watch this plane pull up to the gate traveling with my young child, or mother, grandmother, etc. I know Southwest is known for its fun, laid back qualities, but this is just completely inappropriate to plaster all over the side of the plane.”

A Southwest spokesperson said about a quarter of the response it has received about the promotion so far has been negative. "As with anything that’s different and unique, you do hear from some people who disagree," the spokesperson said. “We wanted to make sure it was in good taste before we put it up on the aircraft.”

I’m not sure what SI publisher Time Inc. thinks about all the negative attention. A spokesperson did not return a request for comment today.

And all this, by the way, from the airline that in 2007 booted a female passenger whose clothes it deemed were inappropriate (read: showing too much skin) for flight. Somewhat ironic, isn’t it?