*Leadership from Active Interest Media is reacquiring a group of snowsports titles it managed more than a decade ago. 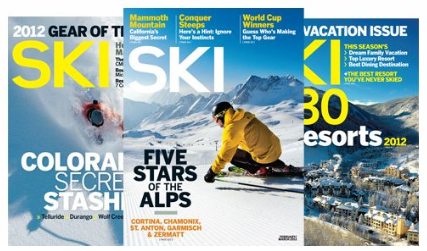 The enthusiast publisher has reached an agreement to purchase the properties of the Bonnier Mountain Group, a division of Bonnier Corp., for an undisclosed sum, the companies have announced.

Included in the deal are the titles Ski, Skiing and Skiing Business, along with action sports filmmaking group Warren Miller Entertainment and public ski governing body NASTAR. AIM says the additions will "effectively double the size" of its Outdoor Group.

Ski, the largest title coming to AIM, had a circulation of 456,945 in 2012, per the Alliance for Audited Media. Circ had dipped about 2 percent from when Bonnier purchased it in 2007. Meanwhile, ad pages have dropped precipitously from 674.98 to 275.26 over that time period, according to the Publishers Information Bureau, including a 34.8-percent loss in the first quarter of 2013.

"We are thrilled to be back full-time in snowsports," says Andy Clurman, president and COO of AIM, in a statement. "We understand this business, we are passionate about the sport and these premier brands, and we have a plan to integrate and improve the products while dramatically expanding the audience."

The mountain sports properties were included amongst the 18 titles Bonnier bought from Time Inc. in 2007 for a reported $225 million.

"I am very happy to have found the right buyer for the Mountain Group, one that will be able to cultivate these specialized snow titles and properties," says Dave Freygang, CEO of Bonnier Corp, in a statement. "This sale allows us to concentrate our focus and shift resources to our businesses in California, New York and Florida."

The sale is expected to close on May 31.

*Editor’s Note: The original version of this article incorrectly stated that AIM had run the properties previously. Mountain Sports Media, sharing the same leadership as AIM, ran the properties.