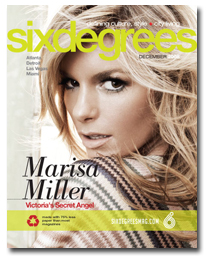 The self-proclaimed “fastest growing lifestyle media conglomerate in the industry” now says it’s the largest, too.

944 Media has acquired the assets of monthly culture and style magazine Six Degrees and its accompanying Web site. Six Degrees published regional editions in Atlanta, Detroit, Miami and Las Vegas. Terms of the deal were not disclosed.

“The addition of Six Degrees to our portfolio makes 944 Media the largest regional lifestyle media group in the country based on circulation and frequency,” 944 founder and CEO Marc Lotenberg said in a statement. With the acquisition, the company says it will distribute 330,000 audited magazines per month, with an annual distribution of 4 million.

Six Degrees will relaunch under the 944 umbrella with the April 30 issue, the company said.

“Acquiring a complementary company like Six Degrees is a smart move for 944," according to Regional Media Advisors president Kim MacLeod, because it "affords them two opportunities: generate additional revenue from the same market with a different product, and expand the company’s 944 footprint into the markets already being served by the acquired company without the traditional time-to-market delay. Regional publishing companies can maximize their margins by going deeper into existing markets before they expand into new ones, and this permits 944 to do both efficiently.”