6 Questions for 1843, The Economist’s Newly Relaunched Lifestyle Mag
Aiming to broaden its advertiser and subscriber base, The Economist gives its sister title another refresh.

The Economist Group has relaunched its quarterly lifestyle title, 1843, with a new editor and new design, promising deep dives into style, food, travel and technology—feature articles on the topics that might interest readers of the company’s flagship magazine, but wouldn’t necessarily appear in the pages of The Economist itself.

If all of that sounds familiar, you aren’t imagining things. The company essentially did the same thing three years ago, rebranding The Economist‘s then-nine year-old sister title Intelligent Life as 1843 (named after the year The Economist was founded) and expanding the content mix to include profiles, travel writing and fashion shoots on thicker, higher-quality paper stock.

What’s different this time around—apart a new tagline and a slightly tweaked, greatly enlarged logo—is a trimmed-down rate base, increased annual subscription rate and, perhaps most crucially, a series of new digital offerings and integrations with The Economist‘s digital channels, from a new website and a podcast to a digital edition available to Economist subscribers through the brand’s mobile app.

To hear more about the strategy behind the latest iteration of the magazine, we had some questions for 1843 editor Rosie Blau—who joined The Economist in 2010 and most recently served as its China correspondent—and Mark Beard, The Economist‘s senior VP of global subscriber acquisition and publisher of 1843. 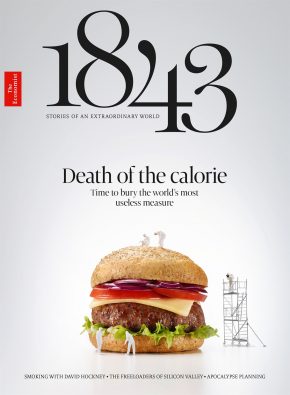 Folio: Why was now the right time to relaunch 1843—what were you seeing in terms of your audience and advertisers?

Mark Beard: The world is a very different place from when 1843 was originally launched. Readers want to read, watch and listen to content in a range of formats, dependent upon the time, place and mood in which they are consuming it. Our experience with expanding the audience that reads and advertises with The Economist tells us that we need to be present in print and in digital, including in-app, online, film and podcast.

And so, in addition to refreshing the content of 1843, we have also taken some key decisions about our digital platforms, and improved the experience for readers and advertisers. For example, from the relaunch issue, 1843 will be available within The Economist classic app, rather than being published in a standalone app. And very soon, 1843 content will also be integrated into Economist.com, increasing the number of eyeballs who will view the content and also increasing the amount of advertising inventory that is available to brands who wish to engage with the 1843 audience.

Folio: What will differentiate the new 1843 from other lifestyle titles aimed at similar audiences?

Rosie Blau: We are offering substance with style. There are a lot of beautifully designed magazines out there, but we are offering fantastic content to read, too. We aren’t consoling, we are provocative and challenging—we want to shake you up a bit and make you question your assumptions, but do so in a way that is entertaining and easy to engage with.

A traditional lifestyle magazine is mainly about the material things in your life, whereas we engage with how you think about it. We are also funny and irreverent. The other way in which we’re distinct is in our rigor and independence. We don’t sell editorial space or credits, we are independent and trustworthy. 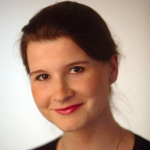 Folio: What are you hoping to convey with the new logo and new design of the book—what factors played into your decision-making around the overall look and feel?

Blau: The new design fits well with the overall editorial strategy: It’s bright, beautiful, surprising and sometimes even funny. The aim of producing something that will delight the reader carries through to the visuals too. We’ve used a red that evokes The Economist’s red box but is darker, to distinguish us. The feel of the pages should give you a sense of space; it isn’t overwhelming to look at (this is supposed to feel the opposite of being deluged by news).

We’ve got really top-class photographers, and we’ve given their work the space they deserve. My favorite page in the new print edition is a photo of a horse’s eye by Tim Flach, who is the best animal photographer on the planet. That single page is a work of art. And you get many of them within a single issue! We don’t look like a traditional lifestyle or fashion magazine. We’re different. So we have a distinct look.

Folio: How does this fit into the broader Economist Group strategy—is it primarily being positioned as a value-add for subscriptions to The Economist, given that it’ll be available in the classic app, or is this aimed at reaching new audiences? Or is it a mix of both? 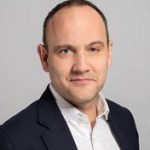 Blau: I see 1843 as expanding The Economist’s universe. We’re for a different moment in your day. Both titles share the same values, the same rigur, independence and intelligence. But they serve a different purpose. You read The Economist to understand the world out there, and you read 1843 to illuminate your own life and your own experiences. The subject is different and complementary—and the approach is different too. The Economist explains, whereas 1843 tells stories. And we look different too, giving as much emphasis to visual storytelling as we do words.

Folio: What’s the rate base for the first issue?

Folio: In terms of the editorial strategy, will you be leading a totally separate editorial team or is it going to be a lot of the same editors who are working on The Economist?

Blau: We have a distinct editorial team on 1843, but there is a good free-flow of ideas between the two titles, and sometimes staff too. I was China correspondent for The Economist, based in Beijing, for three years before being appointed editor of 1843, so I understand both titles. Some of our pieces are written by Economist journalists, others by freelancers. We are lucky that, as a relatively new publication, we have the backing of such a strong and well-known brand.