Against a backdrop of sustained industry instability, editorial salaries have remained relatively consistent year-over-year, according to data from Folio:’s annual survey of compensation levels at consumer, B2B and association magazine publishers, conducted in partnership with Readex Research.

A sample of 255 editors from across the U.S.—about half of whom identified as editors-in-chief, with the other half split between junior-level/associate editors and operational-level/managing editors—indicated that EIC’s at the 50th percentile earned a total of $97,900 last year, including bonuses, compared to $94,500 in 2017.

At every level, however, a glaring trend in these annual surveys endures: male editors continue to significantly out-earn females performing similar job duties. A sample of 64 female and 59 male editors-in-chief indicated that women in such roles earned $0.83 for every dollar earned by their male counterparts. Across 79 respondents at the managing-editor level, that figure was $0.86, while at the associate level it dropped to $0.76, based on a smaller sample of 42 respondents.

Asked to assess their overall satisfaction, respondents generally expressed a desire for increased compensation after taking on additional workload, but also acknowledged the volatility in the media and publishing industry and benefits like the ability to work remotely.

“It’s the middle of the road,” said one associate editor. “I’m happy to be working in this profession and I know there are a lot of people out of work with my skill sets who would love to be where I am, so I’m lucky. Do I want to earn more for the long hours and hard work that goes into this job? Of course!”

“Real wages for editorial work have barely budged in the four decades I’ve been doing this,” added an editor-in-chief. “The ability to take in quantities of information, understand the patterns and discern meaning, then communicate that to others in an understandable and entertaining way is thinly distributed in the population. While big media profits have soared, the folks who actually do the work haven’t shared in the spoils.” 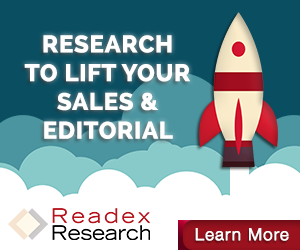 By and large, editors-in-chief were, unsurprisingly, the longest-tenured at their present companies and the most likely to possess a post-graduate degree, but experience and education level had less impact on overall pay at this level than the others.

Including bonuses, top-level editors with a post-graduate degree reported earning 16.5% more than those with only a four-year degree, compared to a 21.2% disparity at the managing-editor level.

Interestingly, 53 editors-in-chief who had been in their current positions for three-to-nine years reported higher median salaries and bonuses than the 42 who said they had been in their roles for a decade or more.

“I have the longest tenure in my group and I have trained or will train all editorial employees who join our group,” said one respondent. “I have also managed multiple publications during times of turnover. I feel I could be compensated better for my loyalty and expertise.”

Editors-in-chief in B2B media reported base salaries consistent with those at consumer magazine publishers, however bonus compensation for the latter group was nearly twice that of B2B editors at the 50th percentile.

About one-third of editors-in-chief indicated that they work at least 50 hours per week, and this group reported significantly higher compensation than those who put in 40–49 hours: a median of $110,000 in salary and bonuses compared to $92,300.

As in previous years, a print and digital divide also persists: 31 editors-in-chief who indicated that they primarily work on print magazines reported a median base salary of $80,000, compared to $92,000 for the 72 respondents who work across both platforms.

“I feel [my compensation] is quite fair for what I do, especially as I am a print person first, but once upon a time there were 24 of us, and now there are 12, and we are doing a lot more,” said another. 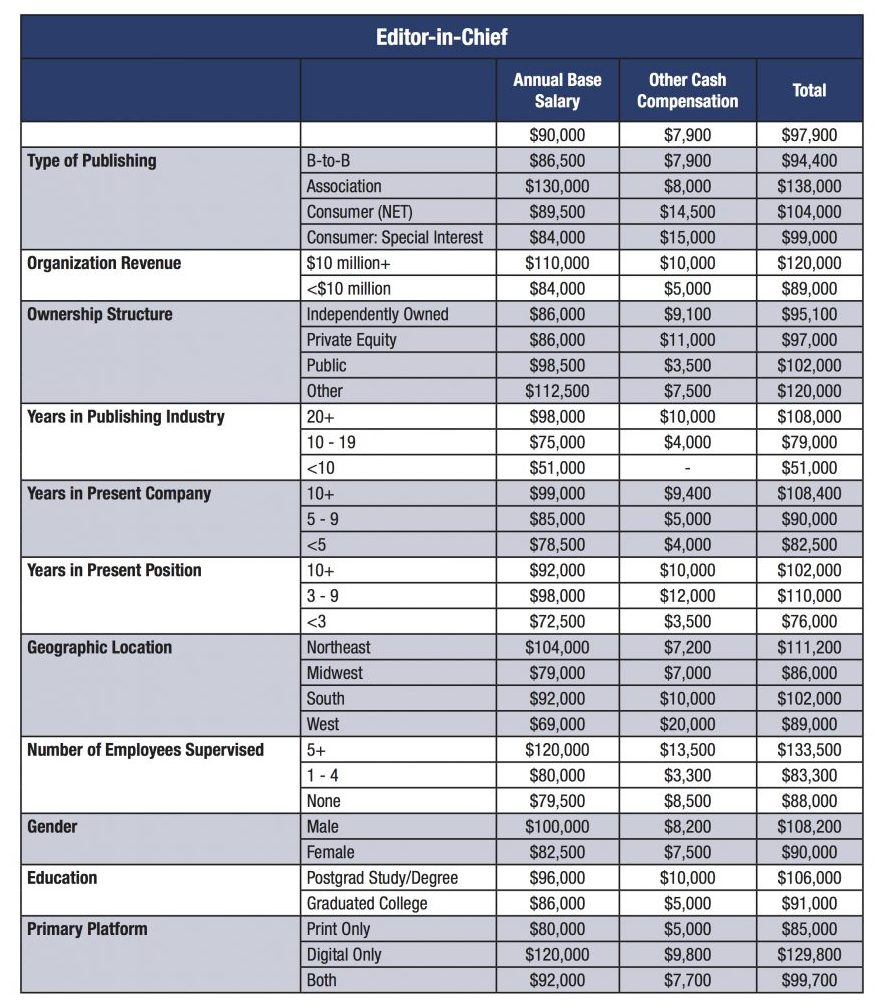 As mentioned above, managing editors reported greater relative returns on post-graduate study than their bosses, and tenure also seemed to carry little weight; managing editors who had been in their roles for three-to-nine years similarly reported slightly higher income than those who had spent 10 or more years in the same position.

“I feel I should earn closer to the national average, but have held myself back from the fear of leaving a longtime employer,” said one respondent.

Unlike editors-in-chief, managing editors at B2B media companies reported significantly lower salaries than those in consumer or association publishing: $69,500 for B2B editors at the 50th percentile compared to $85,400 at consumer magazines.

Managing editors working across print and digital similarly earned about 13% more than those working primarily in print, but the size of their teams had relatively little impact on overall compensation. Managing editors overseeing five or more employees reported a median overall income of $87,000, compared to $82,800 for those overseeing teams of one-to-four staffers.

“The organization has become top-heavy as mid-level and junior roles have been eliminated, thus the work falls on remaining mid-level employees,” said another. “Compensation does not reflect the new workload.” 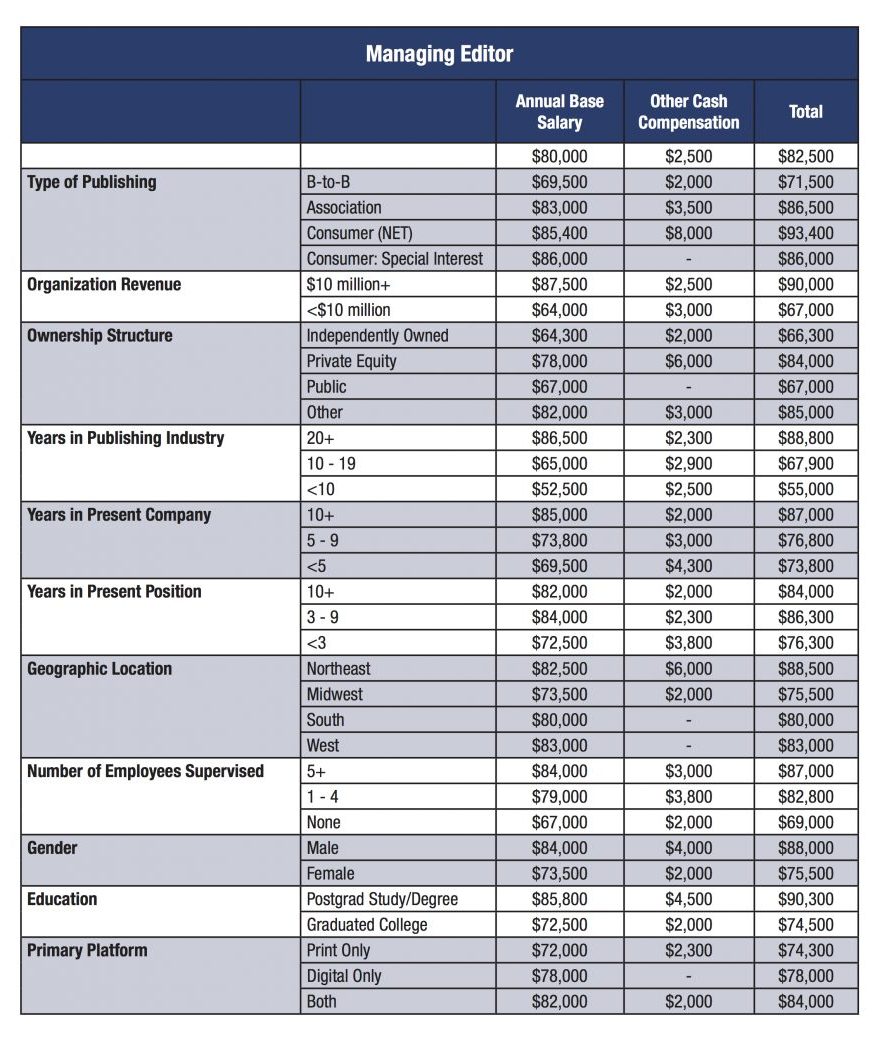 Based on a sample of 53 responses, the associate level is where the gender pay gap appears to be the most severe—consistent with last year’s survey—despite associate editors being the most predominantly female of the three groups.

This group is also the least likely to work more than 50 hours per week, supervise other employees or possess a postgraduate degree—although the 15 respondents who do reported base salaries 31% higher than those with a bachelor’s degree alone.

Like managing editors, tenure also has minimal impact on this group’s wages, with those in their present roles for fewer than three years earning salaries and bonuses consistent with their more experienced counterparts.

“Pay has been stagnant for the past three years, though responsibilities have increased and the company is very profitable,” said one respondent.

Company size also appears to have an outsized impact on this group, with those at organizations with revenues in excess of $10 million earning 34% more, on average, than those at smaller companies.

“My company provides good benefits and I make a good salary, especially compared to others with my job same title, but my responsibilities have grown disproportionate to my job title … and I should be paid accordingly,” said another.

More than any other group, associate-level editors reported anxiety over their career choice and the ability to earn a sustainable living.

“I feel like I am stuck at my salary. Healthcare costs more every year, and the company’s annual raises do not cover it,” said one respondent. “I feel like I need to get a different job to see any real increase.”

“I am struggling to make ends meet,” added another. 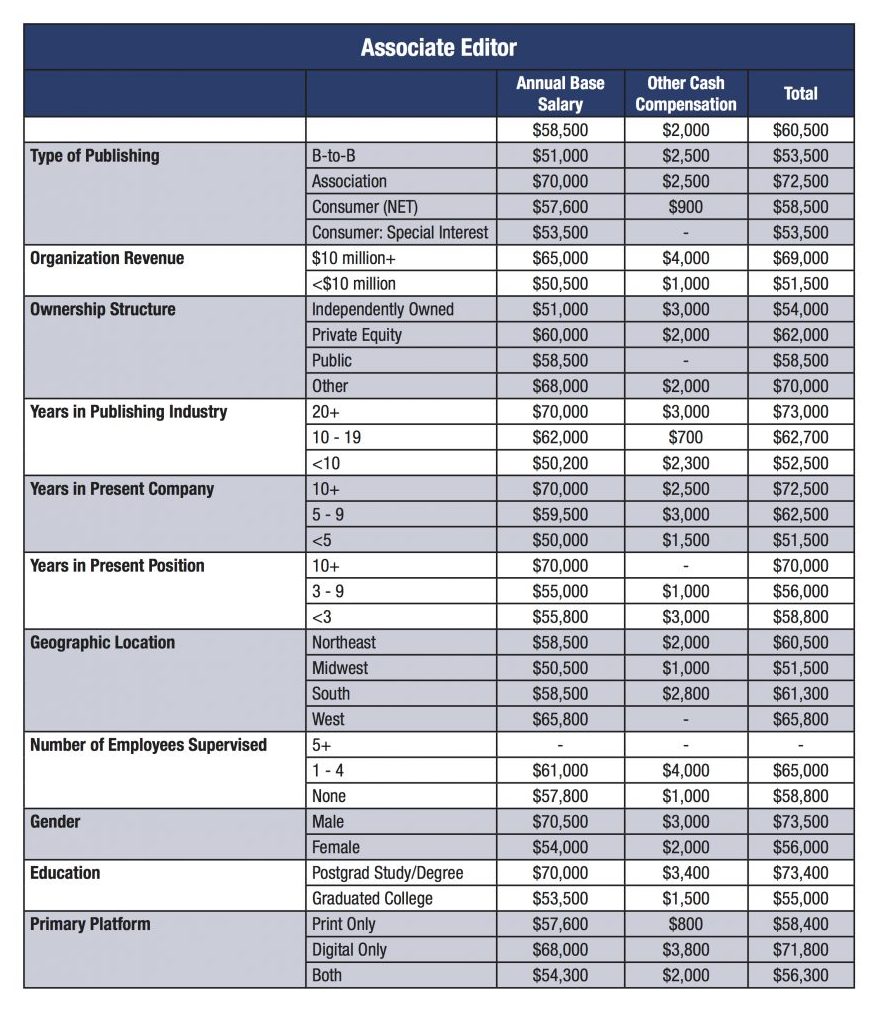 This is part one of our two-part annual salary survey. Check back for the sales and marketing surveys on October 1.

Data for the 2019 Folio: Editorial Salary Survey was collected via an online survey over a period of 12 days in May 2019 in conjunction with Readex Research, who tabulated the results. In total, 255 editors completed the 38-question survey jointly designed by Folio: and Readex. The margin of error based on the tabulated responses is +/- 4.2% at the 95% confidence level.