Despite the best guesses of b-to-b publishing CEOs, print revenue isn’t going away and digital dollars aren’t stacking up as fast as they thought (or, maybe, hoped) they would.

Print advertising still accounted for more than half (52.5 percent) of total revenue last year for the 100-plus respondents  to FOLIO:’s 2014 B-to-B CEO Survey. Remarkably, that’s actually higher than it was in 2010 (52.4 percent).  And it’s even more surprising when you look at what’s been expected from print advertising on a year-by-year basis.

In each of the last five surveys, respondents have underestimated the following year’s revenue from print (last year, for example, the  group thought print advertising would make up 49.5 percent of total revenue in 2014—3 percentage points less than what it turned out  to be). The gap between expectation and reality has run anywhere from less than 1 percent to more than 6 percent since 2010, but always lower.

Digital media, while growing, has seen the opposite effect. B-to-b media CEOs are consistently overrating its revenue potential-last year, by 3.7 percent.

In a vacuum, the differences don’t really matter—they’re undershooting digital and overshooting print by similar amounts; the bottom line ends up the same. It could have a bigger impact over time  though. For better or for worse, respondents are putting their money where their mouths are: into digital platforms. 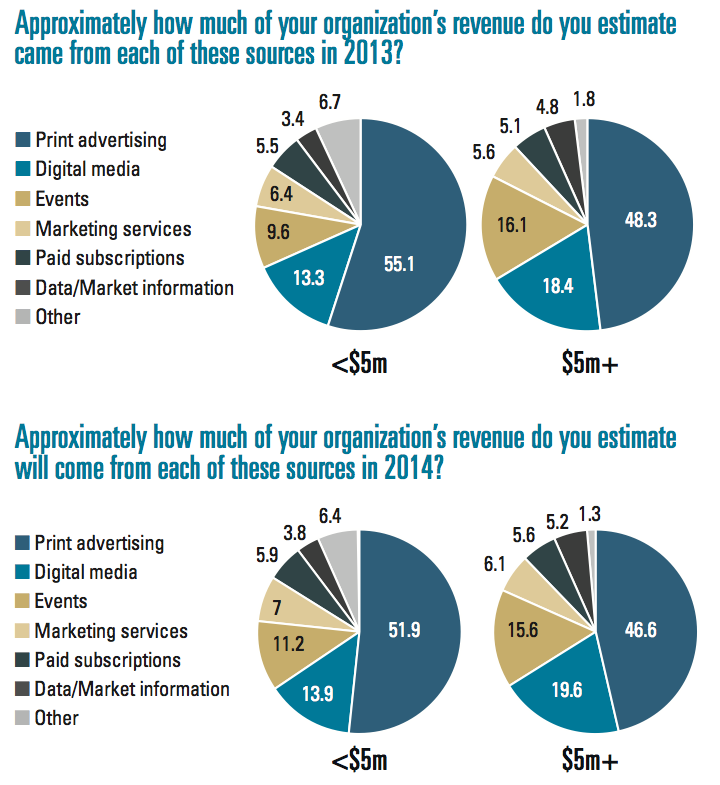 Eight percent of those surveyed invested $500,000 or more in technology last year, while 44 percent crossed the $25,000-mark—both 5-year highs. How many didn’t make significant investments in tech? Just 9 percent-a 5-year low and half of what it was only a year ago. Some of those investment dollars are going toward non-media infrastructure improvements, but a majority are aimed at bolstering digital media capabilities through upgrades to websites, CMSs, webinars, social media and video.

Respondents are investing in human capital around digital products as well. A quarter of the CEOs surveyed say they’re planning to add digital media staff in 2014.

It’s a different story with print. Despite the revenue stability, only about one third of respondents’ companies will make anything more than a minimal investment in print products this year. A quarter of them will shift resources away from ink and paper.

There are obvious qualifiers—the sample changes slightly from year
to year, and there may be different patterns based on company size
and market, for example—but the trend of overvaluing digital and
undervaluing print is noteworthy given the rhetoric and investment priorities.

Digital media has also been the most profitable piece of business over that period, reliably generating margins above 16 percent. (Digital media was actually supplanted by data/market info sales as the most-profitable area in the last 12 months though. More on that later.)

Not surprisingly, CEOs are expecting digital media to continue driving growth in 2014—more respondents are expecting increased revenue there than from any other source—but their enthusiasm has been tempered. Revenue forecasts are close to 3 percent lower than they were last year. Why?

As a percentage of total revenue, event earnings have ticked up 2 percent in each of the last two years, even though expectations have called for less than half of  that growth (events made up 12.2 percent of total revenue in 2014). One-third of respondents also claimed live shows as one of their fastest-growing business segments last year, only trailing digital media. Profit margins have been above 17 percent since 2011.

Companies are riding the momentum forward with more events on the way. Of changes anticipated for 2014, 46 percent of respondents say they’re planning on launching a new event-that’s up from just 32 percent last year and almost double the next most-commonly anticipated change, the launch of a digital startup.

Additions to event staffs highlight the emphasis even further, with a quarter of the companies surveyed planning to add event professionals in 2014.

Perhaps most notably, almost a third of the respondents called creating live events one of their Top 3 priorities for the year, behind only increasing profitability and growing revenue.

Events aren’t anything new for b-to-b media companies, but they are becoming a more critical component.

The other increasingly important segment in b-to-b media? Data and market information.

While still a small piece of the revenue pie—3.9 percent last year and expected to be 4.3 percent in 2014—sales from data and market in- formation are growing steadily while revenue from marketing services and paid subscriptions—6 percent and 5.3 percent of total revenue last year, respectively—have each trended downward recently.

Despite the low volume, there’s reason to be optimistic about the segment’s potential. Average profit margins were at 19 percent for data and market services at respondents’ companies-well above it’s 5-year average and the highest of all business units at b-to-b publishers. Close to 20 percent of the CEOs surveyed expect higher revenue from data and market services this year.

This could just be an aberration though. Data and market information sales were actually the least profitable business last year with average margins of 13 percent.

While no one’s figured out how to optimize for mobile devices yet, most of the industry’s taking a shot at it, according to a new series of questions aimed at tablet and mobile publishing for the 2014 survey.

There’s a significant difference  in mobile strategy between companies generating at least $5 million in revenue and those falling below that threshold though. Mobile adoption is almost universal for large publishers now (only 7 percent say they haven’t opted for a responsive or mobile site yet), while more than 40 percent of smaller publishers have stuck with desktop-only sites to this point.

It’s a similar breakdown for tablet publishing. Two-thirds of respondents’ companies are putting out an edition specifically for the devices. But again, larger companies tend to be more aggressive in tablet publishing than their counterparts at smaller b-to-b media firms.

Overall, b-to-b media appears to be on solid ground. Profitability hit a 5-year high, with just 4 percent of respondents’ saying they finished 2013 in the red. More respondents reported margins of above 30 percent than at any point since 2010.

Companies are looking to spend as well with 69 percent saying they’ll add staffers in 2014—again, a high point compared with previous surveys. 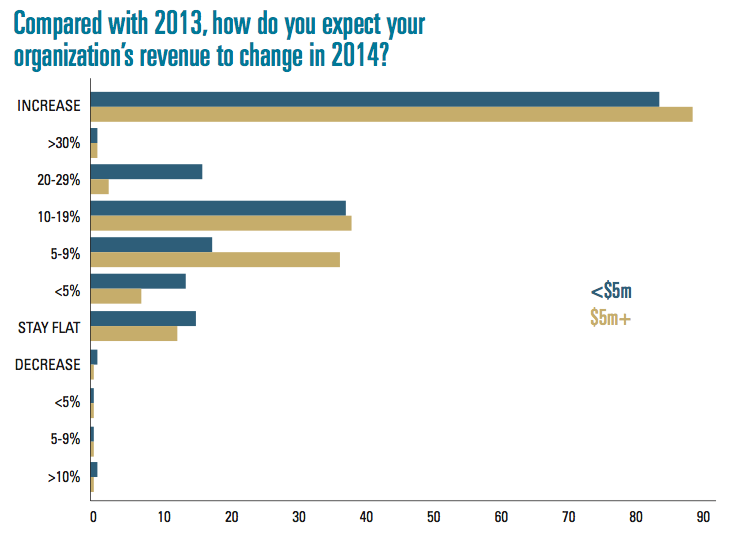 CEOs specified exactly where they see spending headed in the verbatim responses. Not surprisingly (and in line with the numerical responses) digital media and events were popular investment areas.

"Investment to meet digital content demands," "move to digital media," and "creating new online offerings" were a few specific comments that seemed to echo the feelings of many. "Adding apps," was also mentioned.

"Events have exploded for our company," one comment read, while another noted that "trade show event start-up expenses" made up a significant portion of their budget. Several said "upgrading events" would be a reason for overall increases in spending.

Many also described increased spending in sales departments in order to leverage their growing digital and experiential assets.

And despite a lack of investment moving forward, print still does loom as a large cost center. "Higher costs for printing, production, paper and distribution," as well as "higher postage" were common refrains.

With a large, stable revenue stream in print, and three small, but promising businesses in digital media, live events and data and market information, there’s reason for optimism.

The survey sample of 1,000 was selected in systematic fashion by FOLIO: and Readex Research from all of FOLIO:’s domestic subscribers with executive management job titles who classified their company’s primary focus as either b-to-b publishing or a mix of b-to-b and consumer publishing on the FOLIO: subscription form. The survey closed March 14, 2014 with 125 usable responses—a 13 percent response rate.