Like all magazine publishers, associations took a big hit five years ago. Coupled with rapidly evolving consumer habits and an ad community far less reliant on print, association publishers find themselves in a time of change.

They've survived, but it hasn't been easy. Creativity, cost cutting and a focus on core publishing products have kept margins relatively stable. Print revenue is still retreating however, and digital has been slow to pick up the slack.

Overall, associations expect to generate publishing revenue of  $30.00 per member in 2014-down  $2.25 from where it's been over the last three years and $8.32 off its 5-year average.

Many have been able to maintain  margins with spending cuts as revenue has faded though. Per member spending has dropped even further  than revenue over the last 5 years,  down 28 percent versus a 21-percent  decline for revenue.

Per member profit hasn't fallen nearly as far as a result—it's essentially unchanged since 2011 thanks to careful cost management.

That budget maintenance has taken on an increasingly important role for associations as well. Respondents' organizations are relying on publishing revenue to a greater degree now than at any point over the last five years. As a percentage of total association revenue, publishing is expected to account for 21.3 percent of earnings in 2014.

Revenue from print advertising fell sharply from recent totals. Respondents say the category accounted for 54.7 percent of all earnings for association publishers.

That portion has trickled down- ward since the late 2000s when it topped 60 percent, and has been consistently above 58 percent over the last five years. And publishers don't think the slide will stop any time soon. Revenue from print ads is projected to drop another 1.2 percent for 2014.

The effects of that ad page drought are easy to see at the very ends of the spectrum. The percent- age of respondents who rely on print advertising for 100 percent of their revenue has dipped to just 7 percent—a 5-year low—while those who don't sell any print ad pages at all climbed to 5 percent—a recent high.

The drops are significant, and they feed into a larger narrative about the economics of modern publishing, but print ads still make up more than half the publishing revenue for associations. Add in revenue from hard-copy subscriptions and, for some, single-copy sales, and print magazines make up three-quarters (or more) of publishing revenue. Print still drives the business. It's not going away soon and can't be jettisoned lightly.

So, where's new money coming from instead? Pretty much everywhere else. Revenue from four of the five other categories tracked in the survey- paid subscriptions, events, data and info sales and "other" sources-were up from historical norms in 2013.

Some of that shift can be attributed to the decline of print-all things being equal, fewer dollars from print mean every other source gets larger by comparison-but not all of it. Face-to-face events and proprietary data sets have become revenue engines of their own, instead of add-on membership benefits for many associations.

Publishers are also doing a better job of getting creative with monetizing their audiences. Miscellaneous sources accounted for more than 10 percent of overall revenue, well above 5-year averages. 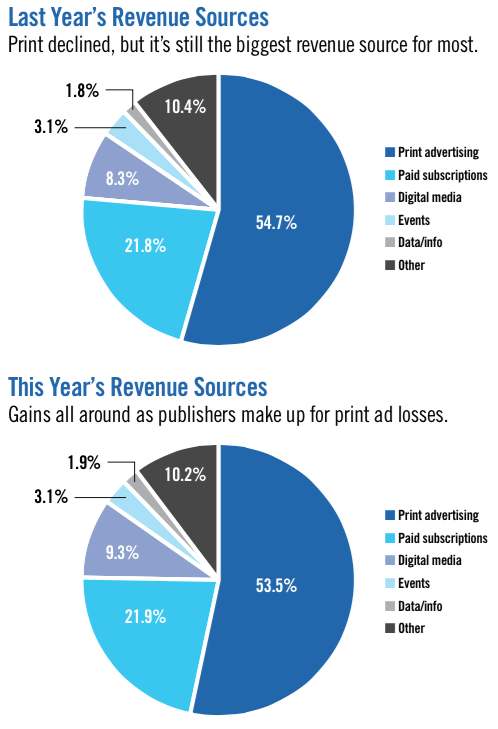 Surprisingly, digital media was the one revenue source that joined print in a decline last year.

Users and potential use cases for the platforms are growing exponentially, but the business models that can sustain digital publishing for associations aren't there yet. Digital media accounted for 8.3 percent of total revenue in 2013, down from an average of 8.9 percent over the last five years.

Associations expect a rebound this year though, projecting digital sources will account for 9.3 percent of total earnings in 2014.

The median number of publications produced by respondents has gone from five to three since 2010. On opposite ends of the spectrum, the number of associations with just a single product has quadrupled, while those with 10 or more titles have nearly been cut in half.

That consolidation has seen associations pivot away from what isn't working and focus on their core products-namely, magazines and digital newsletters. Associations are actually producing more of each now, with both jumping 4 percent over the 2013 survey.

Meanwhile, production of digital editions, journals and newspapers has decreased. Fewer associations are seemingly willing to produce bespoke products for their industries, as well, with availability of miscellaneous products dropping more than 10 percent since 2010.

Fewer association publishers are optimistic about their revenue prospects than at any point since 2010, but a smaller number also expect declines next year.

The majority fall between those poles. Most respondents are anticipating minor changes in either direction.

With just one-fifth of respondents banking on an uptick in earnings, and most of those predicting gains of less than five percent, association publishers are clearly looking at growth prospects conservatively next year.

Not many think the bottom will fall out either. Just 13 percent say revenue will decrease in 2014-a comparatively low total over the last five years.

That may not seem like much, but it's the highest expected bump since 2012 (a big rebound year following the recession), and the third year in a row associations have expressed confidence in their prospects for the coming 12 months. 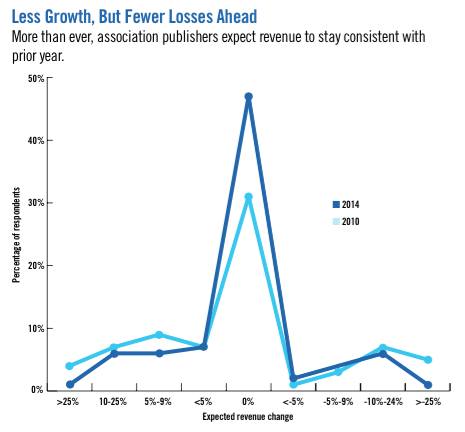 Lack of staffing ranked first, followed up by competition with for-prof- it publishers and a lack of editorial independence.

None of the three options ranked particularly high for respondents, with each coming between 2.6 and 3.6 on a 5-point scale.

Anecdotally, respondents went deeper into misperceptions about the role of associations and how they can best benefit both members and advertisers. A lot can be done to address how their publications are valued and deployed, but they also acknowledge the realities of competing with larger, for-profit entities, and in many cases, their own organizations.

"General views of many that association publications are not valuable," says one respondent of their most significant challenge related to association publishing. "Especially advertising agencies who do not understand associations well."

"Sometimes [you’re forced] to take a larger, less media-centric view of situations,” says another. “[You’re often] competing with education and membership for money."

FOLIO: and Readex Research mailed survey kits to 1,163 qualified domestic individuals in executive management positions at association publishing organizations on August 7, 2014. The survey was closed for tabulation on September 19, 2014. The margin of error for percentages based on 175 total respondents is +/- 6.8 percentage points at the 95 percent confidence level.