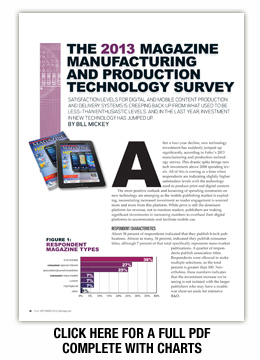 After a four-year decline, new technology investment has suddenly jumped up significantly, according to FOLIO:’s 2013 manufacturing and production technology survey. This drastic spike brings new tech investment above 2008 spending levels. All of this is coming at a time when respondents are indicating slightly higher satisfaction levels with the technology used to produce print and digital content.

The more positive outlook and loosening of spending constraints on new technology are emerging as the mobile publishing market is exploding, necessitating increased investment as reader engagement is sourced more and more from this platform. While print is still the dominant platform for revenue, not to mention readers, publishers are making significant investments in increasing numbers to overhaul their digital platforms to accommodate and facilitate mobile use.

Respondent Characteristics
About 38 percent of respondents indicated that they publish b-to-b publications. Almost as many, 34 percent, indicated they publish consumer titles, although 7 percent of that total specifically represents mass-market publications. A quarter of respondents publish association titles. Respondents were allowed to make multiple selections, so the total percent is greater than 100. Nevertheless, these numbers indicates that the investment increase we’re seeing is not isolated with the larger publishers who may have a sizable war chest set aside for intensive R&D.

Combined revenue is a healthy mix for this survey. Twenty percent say their companies bring in $10 million or more. A similar number, 23 percent, are on the smaller end of the market, reporting under $1 million in revenue. A slight majority, 35 percent, represent the middle tier, at $1 million to $9.9 million in revenue.

Again, the mix of revenues represented here points to a shared investment experience across the various sizes of respondent companies.

Those numbers match up with broader industry trends, where trade content often has an easier case to make when charging for content on the digital and tablet platforms. Its utility lends value.

Respondent job types, as they typically have over the years, break down largely between art/design and production. Although this year, we saw a significant increase in respondents who also do e-media and web development work.

Of those in-house resources used, most are applied to the design and production of print products. In very similar numbers to last year’s survey, consumer and b-to-b respondents say that 70 percent and 67 percent of resources are applied to print, respectively. Although 25 percent of resources are dedicated to producing both print and tablet design and layout, a slightly higher number than last year, and identical between b-to-b and consumer publishers.

Smartphones Not High on the List
Once again, smartphone production resources are very small with only 3 percent of resources dedicated to smartphone content on the consumer side and only slightly higher with b-to-b, at 5 percent.

How final files end up at the printer are largely divided between a supplier’s proprietary uploading system and an FTP site. Fifty-eight percent of b-to-b publishers indicate the use of a proprietary platform, such as InSite, while 38 percent utilize an FTP site. Consumer publishers are slightly more evenly split, with 44 percent using a proprietary system and 41 percent uploading via FTP.  From there, numbers drop significantly, with about 5 percent of consumer publishers delivering files through a cloud service and 3 percent still using email attachments. Five percent of consumer publishers also still utilize physical media of some kind, whether DVD, CD or a flash drive. B-to-b publishers on the other hand have almost uniformly moved to the proprietary or FTP methods, with barely reportable numbers indicating these other avenues.

Specific Production Technologies
This year, the numbers broke down quite differently between b-to-b and consumer publishers on the types of production technologies they used to produce their content. Last year, b-to-b publishers exceeded consumer publishers in every category but JDF files. The JDF percentages mirror last year, but the rest of the metrics have since flip-flopped, with consumer publishers indicating a greater degree of use of the variety of technologies. Both categories are heavily into virtual proofing—86 percent consumer and 81 percent b-to-b—which makes sense given the large percentages using a proprietary file uploading service or FTP system.

Last year, virtual proofing showed the largest discrepancy between b-to-b and consumer publishers, with a 10 percent difference, but that gap has since closed.

XML on the Rise
Publishing in XML has grown since last year, with 24 percent and 21 percent of consumer and b-to-b publishers using the technology, respectively. Last year, there was a clear gap with more b-to-b respondents using the technology than consumer, with both at sub-20 percent levels.

This is a metric where we’ll likely see continued growth. Larger publishers are already overhauling their content production systems to enable more efficient cross-platform publishing, a key strategy now that mobile and tablet publishing are a major focus in the content mix.

Production Technology Investment
The investment picture changed this year. We asked our survey recipients to indicate how much their technology investment changed in full-year 2012 compared to the previous year. While the majority of respondents across both b-to-b and consumer markets have indicated “no change” in their investment patterns in both production personnel and technology the percentages of those who are investing has been increasing since 2010—and the b-to-b and consumer publishers that are increasing their spending are doing so at similar levels. This year, 26 percent of b-to-b publishers said they increased spending and 24 percent of consumer publishers said the same. Another trend in this area is the smaller number of respondents who say they’re decreasing investments.

New Tech Spending Shoots Up
The most striking difference in this year’s report is the jump in new technology spending in 2012. We’re not talking huge numbers here, but after four years of new technology spending declines, the reported investment in this year’s survey suddenly spiked. After bottoming out at about a mean value of $22,000 in 2011, full-year 2012 spending more than doubled to a mean of $47,000.

Given these numbers, publishers may have abandoned a wait-and-see approach to adopting updated production technology.

Satisfaction Levels
A new line of questioning began last year around satisfaction levels associated with various technology groups, which was continued in this year’s survey. It appears that respondents are gradually warming up to new technology—this comfort level is perhaps what’s behind the decision to invest more money.

Understandably, print tech satisfaction levels are very high. Publishers are clearly well entrenched in producing their central product platform. Virtual proofing, website production, content management platforms and mobile app layout production technology round out the top five categories by respondent satisfaction levels. Again, there is some correlation here between usage and satisfaction. JDF files are at the bottom of the list, for example.

And looking back at actual investment, it’s not as if satisfaction is a direct correlation to investment levels. For example, the production investment numbers indicated in figure 9 largely show more investment is coming from the consumer side of the business. It’s not by much, but the consumer respondents said they invested a mean of $48,500, compared to $46,900 in the b-to-b category.

Broken down by revenue, larger market publishers tend to be more satisfied across the various technology groups, perhaps due to their ability to invest.

In the “dissatisfied” category, respondents tended to group their concerns around the CMS, web and mobile technologies. While the levels of dissatisfaction decreased slightly from last year, by single digits, the technology groupings are the same.

Methodology
The survey sample of 1,000 was selected in systematic fashion by Access Intelligence and Readex Research from Folio: recipients who indicated on FOLIO:’s subscriber form they are within one of the following functions at their company:

The sample of the survey represented 1,635 recipients at the time of sample selection. Data was collected via mail survey from May 29 through July 10, 2013. The survey was closed for tabulation with 153 usable responses—a 15 percent response rate. To ensure representation of the audience interest, results have been filtered to include only the 132 respondents whose organizations publish  magazines.