The 2012 Editorial Salary Survey
Compensation for mid to upper-level editors is a mixed bag when comparing 2011.

There’s really no big news when looking at editorial salaries from 2011 to 2012. As you’ll see in the title breakdowns in the next few pages, if salaries grew or shrank they only did so slightly. The interesting insights, however, have to do with workload and satisfaction.

Among the challenges listed in the verbatims, deadline management received multiple references, which is not surprising give the extra workload editors are taking on. In fact, comments related to workload, finding the time to manage it and figuring out how to efficiently process it were frequent. All this on top of, you guessed it, “lack of resources,” which also made multiple appearances in the verbatim responses. One respondent summed it up this way: “Absolutely not enough time to accomplish all my acquired tasks or the resources to help.”

Another respondent, commenting on industry trends that are expected to have an impact on compensation, noted the dangers of being attached to a print product: “Print pubs receive little attention or care from our association leadership. Most attention, resources, etc., to online/web staff, with very little output/deliverables required. My skill set is not rewarded, so the trend to digital will affect me, unless I change careers.”

According to the survey, 72 percent of respondents have taken on additional responsibilities, a trend that’s at a similar level to 2011, when 77 percent of respondents said the same thing. However, compensation doesn’t appear to be matching the extra work in the minds of the respondents. Only 6 percent feel they’re compensated “very well”—with 5 in a scale of 1 to 5 representing the best—for the additional duties. About a quarter of respondents landed in the middle of the scale, and 30 percent feel they’re not compensated well at all for the extra work.

Getting more specific, survey respondents were asked about duties and whether involvement in them increased. By far, online content was the top area, with 86 percent of respondents saying that they’re working more in this area. Event development was second at 37 percent of respondents and print was close behind at 34 percent—which could either mean staffs are shrinking with editors taking on a heavier product load, or new print products are being introduced.

Top editors generally saw their pay increase this year, except in the b-to-b category, which dipped only slightly from a mean salary of $96,500 in 2011 to $94,800 this year. Consumer editorial directors made the highest leap in pay from year to year, going from $79,600 last year to $89,000 this year—still lower overall than both b-to-b and association top editors. Association editorial directors edged up $6,300 this year to a total mean base salary of $96,500.

A similar situation can be said for additional cash payouts—b-to-b top editors received about $11,500 in extra cash last year and $9,600, or just over 10 percent of base pay, this year. Not bad, in either case. Consumer editorial directors received an extra $6,600 in cash and Association editors took in $8,500 on top of their base pay. 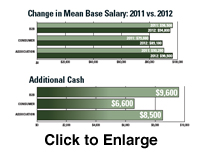 The New York area remains the place to be for the top end of the pay scale, with editorial directors in that region getting $137,200 compared to $87,900 outside of the region.

Company revenue also has an impact on pay, with revenues of $10 million or more resulting in a $115,000 salary, much higher than companies making $3 million or less on the top line who pay their editorial directors about $69,400.

Consumer editors won the additional cash contest, bringing in an extra $7,000 in 2012. B-to-b editors were next in line for additional cash with $5,500 and association editors expect to receive another $4,900. 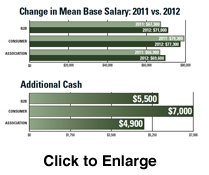 Editors that work on paid only circulation receive $88,300 while editors responsible for controlled only get a significantly lower $68,700. Those who work on both receive $70,200. Supervision is another needle-mover, with editors supervising five or more staffers getting $94,000 while editors who supervise one to four getting $71,000. Editors in the unfortunate position of having no staff to supervise bring in a significantly lower $67,700. 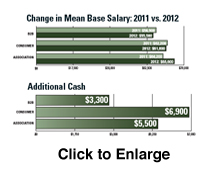 A survey sample of 2,000 was selected in systematic fashion by Red 7 Media, publisher of Folio:, and Readex Research, representing 2,520 domestic subscribers and show and webinar attendees. Data was collected via mail survey by Readex Research starting on April 25. The survey was closed for tabulation on May 30, 2012 with 513 usable responses—a 26 percent response rate. The margin of error for percentages based on 443 key respondents is +/- 4.2 percentage points at the 95% confidence level.