The State of the Digital Edition Industry in 2011
Publisher satisfaction grows but monetization continues to frustrate. 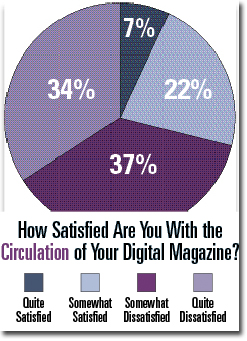 We’re only about a year into the tablet age but more than a decade of using digital editions. Today, with the rise of ever increasingly sophisticated mobile devices and apps, digital editions are poised to leap to the forefront of publishers’ revenue generation plans and serve as their flagship on devices such as the iPad.

But are they able to deliver? Nxtbook Media recently wrapped its 2011 State of the Digital Edition survey, which looked at audience development and revenue growth, as well as where mobile fits in.

The good news? Publishers on both the consumer and b-to-b sides are more satisfied with their digital editions than last year when Nxtbook first conducted the survey. However, there is some growing frustration as publishers continue with how to actually monetize digital editions.

Satisfaction Up by 40 Percent

Forty-nine percent of respondents said they are satisfied with their digital edition (12 percent are “quite satisfied” while 37 percent are “somewhat satisfied”), up 40 percent from 2010. “Publishers this year are more optimistic and they’re also more decisive than last year,” says Nxtbook marketing director Marcus Grimm.

However, while publishers are realizing digital editions have great potential for growing audience, they aren’t sure how to do so. Sixty-four percent of respondents say they are confident there are many more readers out there but they don’t know how to reach them (up from 59.3 percent who said the same last year). “That speaks to the youth of our audiences,” says Grimm. “Publishers are trying lots of things; we know readers are out there, but we’re not cracking the code. The iTunes store brought us to a totally different place—every time we think we have this space figured out, it changes.”

Just 21 percent of respondents said they know there are more digital magazine readers out there and they know how to reach them.

Still, Grimm advises publishers should strive for 15 percent of their readership to come from digital editions at this stage. “If you can get to that, it’s a vibrant number,” he adds. “It’s a large enough number that your advertisers will care about.”

Perhaps most troubling, the number of respondents who say they’ve tried many ways to make money with digital editions and are fairly convinced they can’t nearly doubled from last year to 8 percent.

Advertising options are growing for digital editions. Nxtbook offers several positions in the digital interface, including a marquee position that is “left of cover.” “One publisher years ago said that was his boardwalk space,” says Grimm. “Publishers will share simple toolbar positions. Others say don’t change for ads at all but let’s put a video in there, we’ll upcharge for that. A lot of publishers say you have got an ad in the print magazine, if you want to link live in a digital edition, pay an upcharge. I’m not a fan of that but if you trying to find simple way to start digital conversation, you can start there.” 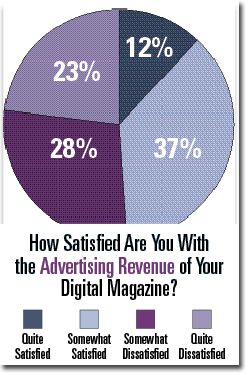 Still, publishers are undaunted about the potential. Fifty-nine percent of respondents are “aggressively moving forward” with mobile devices, up 25 percent from last year.

That’s actually a good sign for the industry, according to Grimm. “Publishers are now making decisions—two years ago, they were saying they weren’t sure what to do. Now some are saying we absolutely have to be moving in this direction.

The Rise of “Digitally-Optimized Magazines”

Twenty-one percent of respondents say they already offer designed-for-digital optimized magazines (which offer multimedia and no zooming) while 23 percent say it’s very likely they will do so in the coming year.

“Publishers are more bullish on optimized editions,” says Grimm. “Publishers say, ‘We’re tired of PDF, we want to do something special.’”

However, the biggest obstacle to offering an optimized digital edition remains staffing and resources. Forty-six percent of respondents say their staff is stretched too thin “to create a different looking product.”

Grimm says publishers can have optimized digital editions without an app. “UBM does all kinds of special editions and supplements with brands like EE Times and they’re concerned about it being optimized in in the browser,” he adds. “We have publishers who come to us and say, ‘we have a PDF, we want to make it a Nxtbook,’ and they pay less than $1,000. Others come to us for layout and design and the costs are comparable for what you’d pay for. Others say we have time and talent for a digital edition, but they need a style guide, which ranges from $2,000 to $5,000 for a one-time charge.”

HTML 5: The Next Big Thing

The emergence of HTML 5 offers publishers the chance to offer a richer browser experience (and re-establish themselves as sellers of digital editions, rather than having to rely on iTunes or other third-party digital newsstands).

“Some of the online newsstands have been successful but at the end of the day, the best person to sell your magazine is you,” says Grimm. “Publishers are now addressing HTML 5 so they can sell it themselves. The Financial Times is selling an optimized browser experience—that gives them the ability to bypass Apple and do it themselves. If you have an audience that loves what you’re doing, don’t make it harder for them to find you in something like the iTunes store. In three to five years, you’ll be doing it on your own, through your own websites.”